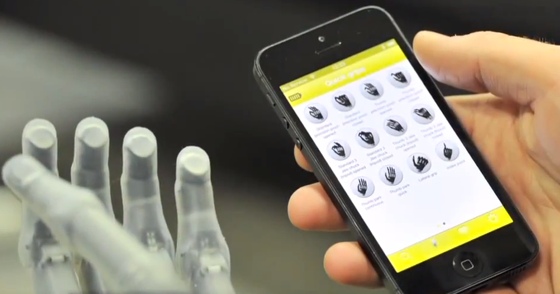 Here’s CNN’s Dr. Sanjay Gupta reporting on the latest on prosthetic technology: a pair of bionic hands controlled from an iPhone app. 34-year-old Jason Koger in 2008 had a brush with death when he got jolted with 7,200 volts of electricity.

Doctors had to amputate his both hands and he’s been trying out a variety of prosthetic hands ever since. Four years later, UK-based prosthetic developer Touch Bionics comes up with the i-Limb Ultra Revolution, an iPhone controlled bionic hand.

It offers “unparalleled dexterity and control, enabling wearers to more easily perform activities of daily living and thus increase their quality of life.” The video is right after the break…

The CNN report highlights an auto-grasp feature and app control, the latter allowing patients to use their iPhone 5 or iPod touch device to select among 24 different types of grip patterns for greater functionality.

Among the pre-programmed patterns: a right click on a computer mouse, a tri-pod grip to pick up a pen and hand-shake grip for business meetings. Of course, grip patterns are fully customizable so patients can create their own to suit their specific needs.

The bionic hand also lets one rotate their thumb and allow each finger to move independently. It would have been even more awesome if he could use Siri to control his hands.