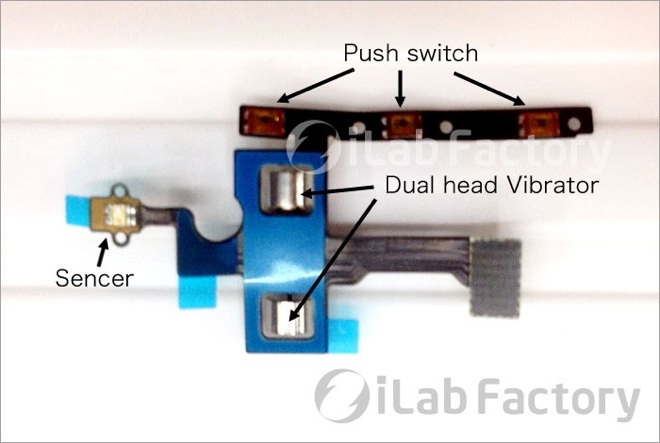 In what could be the first physical evidence of a part that may or may not be related to Apple’s rumored less-pricey iPhone, a reliable Japanese blog has posts an interesting image of a ribbon cable with a dual-head vibration motor, obtained by repair shop iLab Factory. While the flex cable looks like it connects to the iPhone’s standard volume rocker and mute switch, it’s the rotation motor which raises hope that this particular part could belong to the budget iPhone…

The image was published Thursday by the rather accurate Japanese blog Macotakara, which is increasingly establishing itself as a reliable source of tidbits on unreleased Apple gizmos.

The blog speculates that a change to a dual-head rotor format may indicate a possibility that this particular part belongs to a low-cost version of the iPhone that big media says has been in the works for quite some time.

For what it’s worth, dual-head motors are indeed generally bulkier and the budget iPhone is said to be larger and thicker than existing iPhones.

Eric Slivka of MacRumors explains how this part differs from the iPhone 5S flex cable which has three buttons that correspond to the locations of the two volume buttons and the mute switch on previous iPhone models.

But on this part, all three features appear to be buttons, suggesting that this upcoming iPhone may see the mute switch become a push button.

Of course, we have no way of telling what device this particular part may belong to. For all we know, it could be one of the early parts Apple may had been considering for prior iPhones.