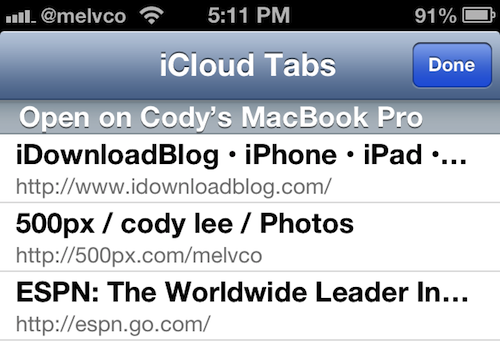 I use my MacBook and iPhone all day, every day. If I’m not on one, I’m on the other, and sometimes I’m on both. So I’m constantly using features like iCloud’s Safari tab sync to ensure a streamlined experience as I switch between devices.

The sync feature itself, which Apple introduced last year in iOS 6, works great. But I have to admit, it would be nice if it wasn’t buried in mobile Safari’s Bookmarks menu. Luckily, that’s not a problem anymore with this new jailbreak tweak…

CloudTabs+ is a new, simple tweak from developer Kaushal Trivedi that allows you to access your list of iCloud-synced tabs in mobile Safari with a single tap. This way, you don’t have to keep backing out of other Bookmark folders to get to it.

Now, when I say simple I mean it. It doesn’t have a Home screen icon, and there’s no options to configure. In fact, you won’t even be able to tell that the tweak is installed until you go to use it by holding down on the Bookmark icon in Safari.

Holding down on the icon takes you straight to the iCloud Tabs list, which shows all of the tabs you have open in Safari on your iPad, Mac and other devices attached to your account. Tapping the icon launches the normal Bookmarks menu.

Really, this is everything you’d want in a tweak. It works great when you need it to, and out of the way when you don’t. But should you get it? That depends on how often you use Safari and its iCloud Tabs feature, and if you’re willing to pay.

CloudTabs+ is available in Cydia, in the BigBoss repo, for $0.99.