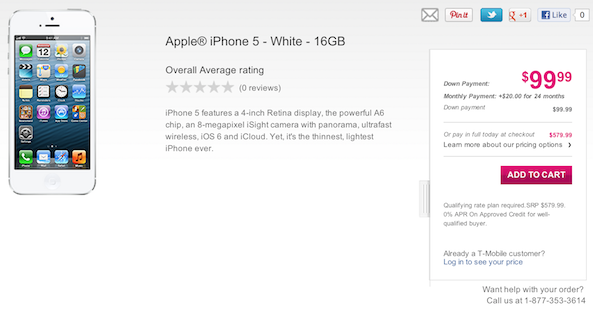 Last week, T-Mobile announced that it was finally joining the other top US wireless carriers as an official iPhone partner. It will be offering all current models of the popular smartphone, including the iPhone 4, 4S and 5.

The phones won’t officially become available until next Friday, April 12. But, as expected, T-Mobile started accepting iPhone 5 pre-orders through its website this morning. And you can grab a 16GB model for just $99 down…

For those who missed it last week, T-Mobile is doing things a little differently than other carriers. It’s stripped down its voice and data offerings to simple unlimited plans, and has thrown out contracts and equipment subsidies.

It’ll be interesting to see how this model ends up working for T-Mobile, as it’s losing to the larger carriers in almost every other way. Its iPhone-friendly HSPA+ network isn’t finished yet, and it’s about two years late to LTE.

But if you’re already sold, you can pop over to T-Mobile’s website and pre-order your iPhone 5 today. It says overnight and two-day shipping options are available, but we’re guess that they won’t start processing orders until the 12th.

It’s also worth noting that the carrier said it will start rolling out an OTA update to unlocked iPhone 5s today to enable LTE and Visual Voicemail. So if you are already on T-Mobile with an iPhone 5, definitely keep an eye out.

So, who’s pre-ordering an iPhone 5?