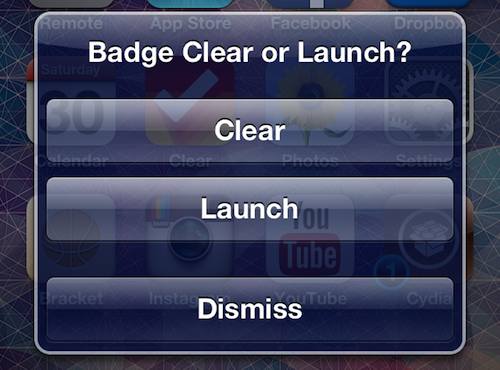 Yesterday we showed you a new jailbreak tweak that allows you to customize the look of your app icon badges. And today, we’ve got something for those of you who’d rather just get rid of them. Introducing Badge Clearer.

Yes, I’m well aware that there are already a few tweaks out there that clear app badges. In fact, we just reviewed one a few weeks ago called Clear Badges. But this one goes about doing it a little bit differently than they do…

Instead of using a ‘Clear all badges’ button, or allowing users to tap the badges individually to delete them, Badge Clearer presents you with a short menu of options every time you go to launch an app: Clear, Launch or Dismiss.

There’s no settings to mess with, which I like. But there’s also a few things I don’t like. First, the menu pops up when opening every app, not just the ones with badges. And second, I noticed some crashing and other stability issues.

Of course, the latter could be due to a conflict with one of the other 20 tweaks I have installed. But the menu thing still makes it tough to recommend Badge Clear. It’s free in the BigBoss repo, though, if you’d like to check it out.