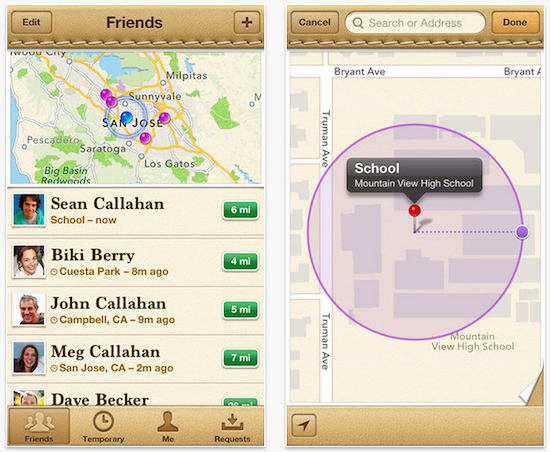 Apple has released an update to Find My Friends this morning, bringing the app to version 2.1. This is the first Find My Friends release since 2.0.1 came out last October, which added new location-based notifications.

Today’s update adds what Apple is calling a “New UI to search for and set location-based notifications.” No, that doesn’t mean that the ugly leather texture is gone. But it does mean that some parts of the app look better…

And believe it or not, that’s the only change listed for Find My Friends 2.1, in addition to the usual bug fixes and improvements. Apple is also careful to mention that the location-based reminders are for iOS 6+ users only.

Apple launched the Friend-Finding app back in 2011, alongside iOS 5. Initially, it was only good for locating friends and family from your iOS device, and sharing your location with them. But it received a major update last year.

With iOS 6, Apple added the ability to set location-based reminders in Find My Friends. So you can now use it as a tracking service, notifying you when your kids leave school or a family member arrives home from a road trip.

Honestly, I don’t really use the app—I just haven’t found a need for it. But if you do, you’ll want to grab this update, which you can find in the App Store, for free.