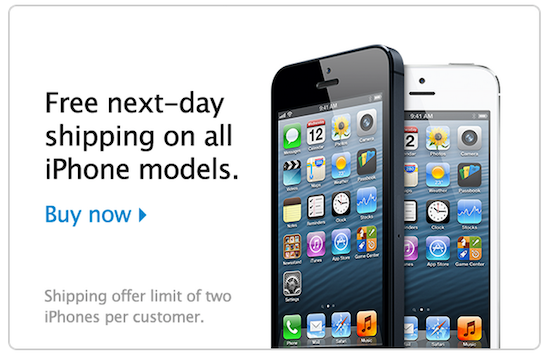 Since Samsung unveiled its Galaxy S4 handset earlier this month, Apple has been on an iPhone marketing blitz. In addition to its two new iPhone ads, it’s also posted a ‘Why iPhone’ page on its website and launched an email campaign.

And today, it continues the push with a new iPhone promotion for US customers. Effective immediately, the company is offering free next day shipping on all of its iPhone models ordered through its online webstore, regardless of price…

As noted by MacRumors, Apple typically offers free shipping on orders over $50. But the new promotion upgrades the shipping method to ‘next day’ and includes the iPhone 4, which as most of you know, is free with a two-year contract.

Admittedly, the promotion is a bit odd for Apple, as there’s no specific reason given for the offer (though, Easter is a week away). But it’s very likely it’s just a simple ploy to boost iPhone sales during this post-holiday, pre-iPhone launch lull.

Speaking of which, Apple is widely expected to release it’s next handset—rumored to be the iPhone 5S—within the next few months. So unless you had your heart set on getting  a new phone before then, it might be worth holding out a bit.

But for those that are interested, the promotion starts today. It sounds like, for the moment at least, it’s only available to United States customers. And it’s limited to two handsets per order.