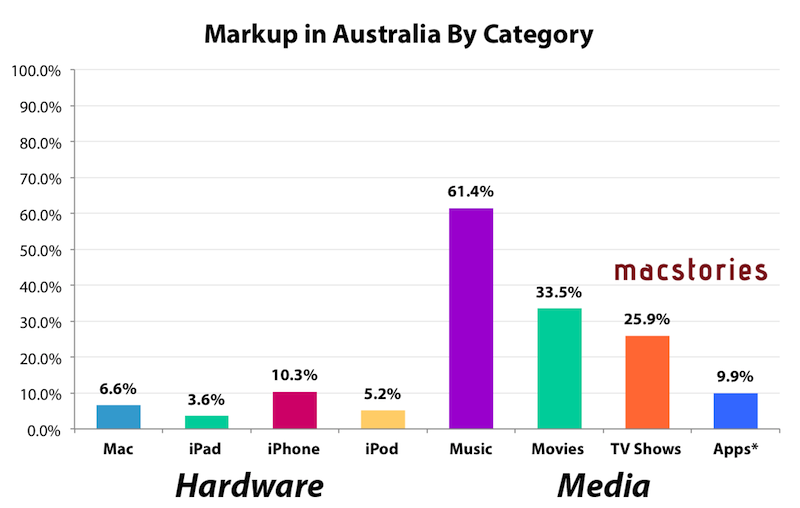 Why does digital content in Australia cost more than elsewhere? It’s not our fault, one Apple executive told a government panel investigating the pricing disparity.

The company (rightfully) blamed “old-fashioned notions” held by content owners for markups as high as 61 percent on music and other digital media sold in the region.

Apple’s Australian Vice President Tony King told the panel the company would prefer to offer music, movies, TV shows, along with hardware at lower prices, hinting that movie studios, record labels and other content owners are forcing the company’s hand…

According to The Sydney Morning Herald, King pointed the finger of blame at content owners:

The pricing of this digital content is based on the wholesale prices which are set through negotiated contracts with the record labels, movie studios and TV networks. The content industry still runs with perhaps old-fashioned notions of country borders or territories or markets.

As noted by MacStories, markup over U.S. prices for Apple products sold in Australia ranges from ten percent for the Mac, iPad and iPod to as much as a whopping 61.4 percent for music. Movie downloads carry a high 33.5 percent markup, while television shows cost 25.9 percent more when purchased in Australia.

The popular iPhone family includes a 16 percent markup for the iPhone 5 and iPhone 4S. By contrast, the iPhone 4 is cheaper in Australian than in the United States.

King, who oversees Apple’s interests in Australia, New Zealand and South Asia, defended the company’s pricing, saying it is “comparable to other Australian physical and online stores.” When pressed by Labor MP Ed Husic, King denied Apple could singly drop prices, saying lower pricing was up to content owners.

Apple was just one of a number of U.S. companies called before an inquiry into the issue by the Australian Parliament.

And software giant Microsoft also said a $2,000 additional cost for a software package was prompted by market competition. Besides, consumers could always reject the software fee by refusing to buy the product, the company argued.