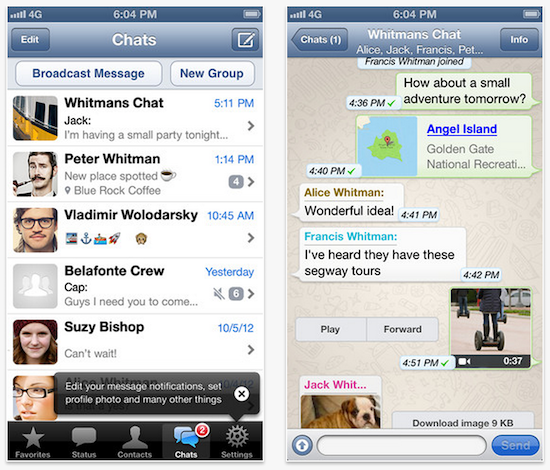 WhatsApp, the popular cross-platform messaging service, is going to be bringing its subscription model to iOS this year, according to CEO Jan Koum. Koum recently spoke with a Dutch news outlet about the company’s near-term plans.

Currently, iOS users can download WhatsApp for a one-time fee of $0.99. In the new model though, which it already uses on other platforms like Android and Windows Phone, the app will be free, with users having to pay an annual fee…

“The new subscription model would apply to new users, Koum said, and would likely follow the same pricing structure as its other apps, which are free for the first year and then cost $1/year, compared to the single, for-life $0.99 purchase that users make on iOS today. “We’re relaxed on dates, but definitely this year. It’s on the road map,” Koum said.”

WhatsApp is easily one of the most popular messaging services around, with a reported 17 billion messages transmitted everyday—some 7 billion inbound and 10 billion out. And it’s believed it has over 100 million users on Android alone.

Koum wouldn’t give a reason for why they’re moving to subscriptions, but it’s not a difficult one to figure out. Users download, on average, 15 free apps for every 1 paid app. Which route would you take while trying to grow a user base?

He also wouldn’t give a timeframe for the change outside of “this year,” but it looks like it’s going to be sooner than later. The phrase ‘Purchase Now’ for renewing iPhone subscriptions was found in WhatsApp’s crowdsourced translation site.

What are your thoughts on all of this? Good or bad move here?