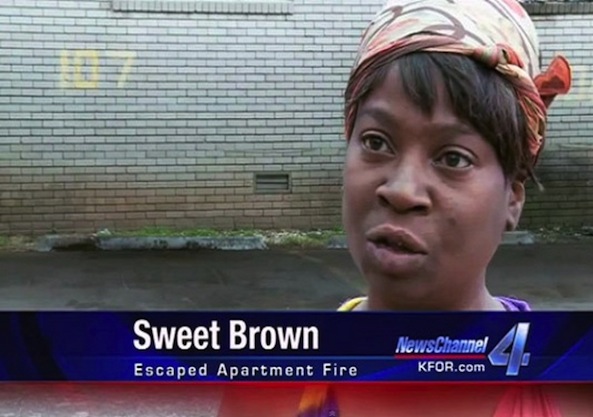 While she may not have time for bronchitis, it appears that Kimberly ‘Sweet Brown’ Wilkins has plenty of time for lawsuits. The viral video star has reportedly filed a copyright infringement suit against Apple for selling a track on iTunes that featured her voice.

The song was called “I got bronchitis,” and it used several samples of Wilkins’ catchphrases from an early 2012 interview that turned her into an internet sensation. She is suing Apple, along with the producers of the track, for some $15 million in damages…

“An Oklahoma woman who found Internet fame with the catchphrase “Ain’t nobody got time for that!” has filed a lawsuit against Apple Inc., saying it did not have permission to benefit from a musical mashup of her quirky television interview.

Kimberly Wilkins, who identified herself as “Sweet Brown” in the interview, said she was defrauded when her voice and likeness were used to sell songs on iTunes, the hugely successful online music store owned by Apple.”

Wilkins was interviewed on April 8 of last year, by a reporter covering an apartment fire in Oklahoma City. With her blunt and candid responses, it wasn’t long before a video of the interview was going viral on YouTube. And then came the inevitable autotune.

According to the lawsuit, the day after the interview, representatives from the Bob Rivers Show in Seattle called Wilkins to talk about the fire. But they made no mention over the song they had produced called “I got Bronchitis,” which was uploaded to iTunes April 10.

“At no time did Sweet Brown consent or agree to have her name, likeness, voice, statements, photograph used in connection with any products, songs, video productions, merchandise, goods, advertisements or solicitations for merchandise, goods or service.”

It’s worth noting here that Apple has lost a similar copyright lawsuit in the past. Last December, it was ordered to pay $165k for essentially facilitating the sales of copyright-infringing content. So it’s very possible that Wilkins could wind up with some big cash here.

Wow, $15 million for doing a 2-minute news interview? I’m in the wrong business.