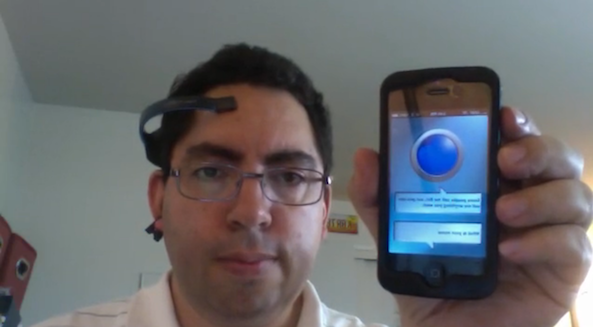 This is pretty interesting. Senior iOS Architect at Honda R&D America Duane Cash is claiming that he has come up with a method of controlling Siri, and subsequently his iPhone, using a brainwave-reading device.

Cash uploaded a video of his project in action yesterday, which he describes as an effort to create a mind-controlled virtual assistant on the iPhone. And what he has so far looks pretty impressive. Check it out…

Here’s the note Cash includes with the video:

“Hello, my name is Duane Cash. I am an iOS developer working on the project to produce a mind-controlled virtual assistant on the iPhone.

This is a one of my initial tests using a brainwave-reading device to control some custom Siri functions on a iPhone. For the first speech recognition segment I wave my hand over the device to activate Siri. During the next portions, I use mental commands from the EEG signals to commands the iPhone to open a map, open a menu and close a menu with voice feedback from Siri.”

As 9to5Mac points out, there have been fake videos like this posted to YouTube before, with folks claiming to control their iOS devices with their minds. But Cash’s position adds some considerable weight to this clip.

Duane is quick to note, though, that this is a personal project of his, and not something that is being directed by Honda R&D. Honestly, we don’t care who’s behind it, as long as it eventually makes it to consumers.

What do you think of mind-control tech? Cool alternative to speech input, or just another gimmick?