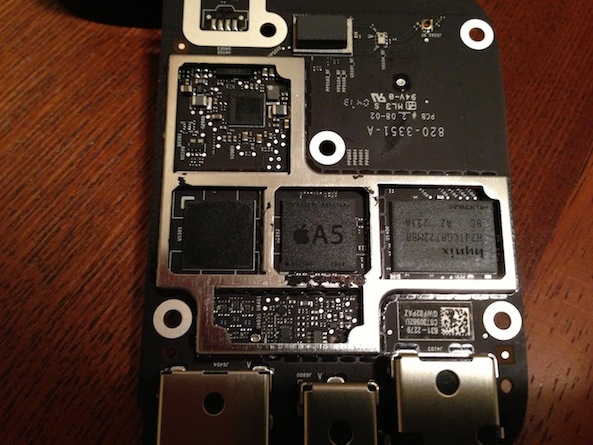 Earlier this year, a software update for the Apple TV (5.2) revealed a new device labeled “AppleTV3,2.” After digging through some FCC documents, and some code, it was discovered that it was just a tweaked version of the third-gen ATV with an A5X processor.

Or at least it appeared that way. The retooled set-top box has just begun hitting Apple Stores, and the folks over at MacRumors were able to pick one up and crack one open this weekend. And they’ve determined that its processor is actually a die-shrunk A5 chip…

“Most notably, the tweaked third-generation Apple TV does not contain an A5X chip. Instead, it contains an A5 chip like its predecessor, although the new chip is considerably smaller than the previous one.

This new A5 found in the tweaked third-generation Apple TV is considerably smaller still, with our measurements putting the chip at just 6 mm by 6 mm.”

The report goes on to speculate that a possible reason for the smaller chip is that Apple is testing out a new 28-nanometer process from TSMC (or Taiwan Semiconductor Manufacturing Company) for future chips—something that’s been rumored for months now.

This would be significant for a couple of reasons. First, as we’ve said before, the smaller a chip is, the more efficient it is, and the smaller Apple can make its devices. And second, this would be the first time Apple went with a chip-maker other than Samsung.

The bottom line here is that while the retooled Apple TV doesn’t mean much now, the possible implications of the smaller A5 chip are huge. It’ll be interesting to see if this smaller A5 chip makes its way into future iOS devices—like maybe the budget iPhone.