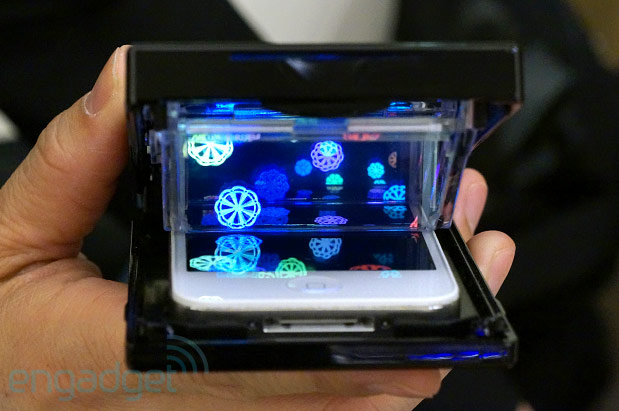 3D was certainly the buzzword of yesteryear, with Android phone makers scrambling to make their handsets take advantage of all manner of 3D technologies with the aim of standing out from the crowd. Apple didn’t make the jump to 3D with either the iPhone 4S or iPhone 5, but that doesn’t mean some people don’t still want it or indeed that it might happen in the future.

With SXSW going on in Austin, there are always some funky little gadgets on show, and the Palm Top Theater certainly falls into that category.

If you’ve ever wanted things to jump out of your iPhone’s screen, then you’ll want to read on…

Priced at a reasonable $36, the little device works thanks to three mirrors which take what is displayed on your iPhone’s screen and then, by bouncing the image around, creates the illusion that the whole thing’s actually in 3D. Because of the way it works, video needs to be made especially for the device which is a shame, but its creators are providing a convertor app for making the custom file types required to make the magic happen, which is nice.

Due to the small size of the Palm Top Theater we don’t think the family will be crowding around it to watch a movie on a Saturday night, but as a concept it’s certainly impressive. Until Apple decides to make the iPhone 3D itself, this may be as good as it gets.

Are you hankering after that extra dimension, or are you of the opinion that 3D video is just another fad? Will Apple add 3D to the iPhone 6, perhaps?