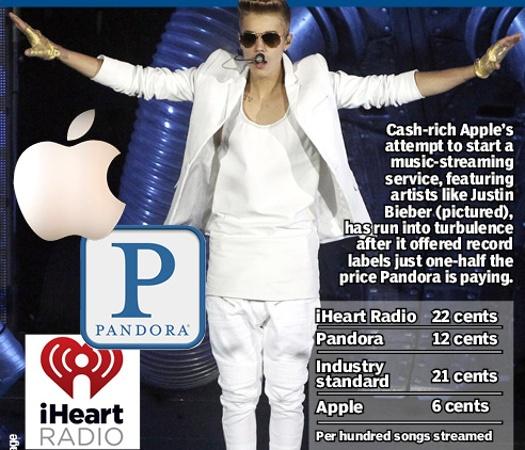 Multiple reports are out this morning, claiming that the reason we haven’t seen Apple’s streaming music service—which was expected to launch as early as Q1 of this year—yet is due to negotiation woes with record labels.

As usual, the problem stems from money. Apparently Apple is only offering the labels half of the royalty rate that they are receiving from Pandora. And the service could be delayed until the summer, or possibly longer…

Here’s The New York Post, who was first to report on the situation:

“The tech titan, the most valuable company in the world, made an initial offer to the label of about 6 cents per 100 songs streamed, sources said. That’s about half of the 12 cents per 100 songs paid by Pandora, the leading online radio service that Apple is taking aim at.

While the labels would admit Apple’s music service could tap a whole new revenue stream for them, they are loath to say yes to the offer as the industry is fighting on Capitol Hill to prevent Pandora from lowering its current rate, sources added.”

The report adds that by comparison, other radio-backed online services such as iHeartRadio pay about $0.22 cents per 100 songs streamed. And Spotify pays the highest royalty rate, a staggering $0.35 per 100 songs.

And here’s The New York Times, who corroborates the Post’s story:

“Apple’s efforts to create an Internet radio service to compete with Pandora has been delayed by licensing negotiations with music companies, according to a number of people briefed on the talks.

Apple had hoped to introduce the service early this year, but now it is not likely to reach the market until the summer, if not later, according to these people, who spoke on condition of anonymity because the talks were confidential.”

Both reports claim that Apple wants to preload an app for the music service on its mobile devices that can deliver a free stream of songs tailored to each user’s taste that will be supported through its iAds advertising platform.

Given that Apple sells 50+ million iOS devices per quarter (3 months), such a move could quickly put it in contention with some of the bigger players in the streaming music space. Pandora, for example, has 65 million users.

But it’s no surprise that Apple is having trouble negotiating licenses for the service. The record labels, for their part, feel that Apple can afford a much higher royalty rate. And Apple, of course, thinks it deserves a discount.

In fact, Beats CEO Jimmy Iovine says he spent years trying to convince Steve Jobs to get into the music subscription business, but he didn’t ever want to pay the record labels enough. “He felt they’d eventually come down.”

Ironically enough, a report surfaced earlier this week claiming that both Tim Cook and Eddy Cue met with Iovine last month to discuss his upcoming ‘Daisy Project,’ a streaming music service with an innovative discovery engine.