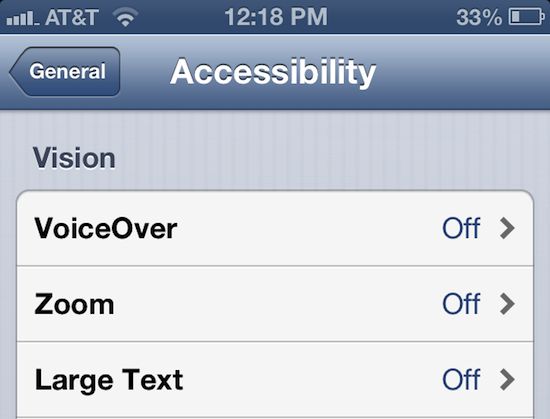 Samsung has taken another hit in its patent war with Apple today.A Mannheim Regional Court in Germany ordered a stay of its infringement suit against the Cupertino company, pending a validity challenge on the patent-in-suit.

On the surface, this case looks just like any other Apple-Samsung court battle. But it’s grabbing a significant amount of attention this morning due to Samsung’s patent in question, as it’s used in the iPhone’s VoiceOver feature…

The patent itself is the German equivalent of Samsung’s U.S. Patent No. 6,937,700 on a ‘device for and method of outputting data on display section of a portable telephone.’ Ie: having on-screen content read aloud to you.

As aforementioned, it’s essentially what the iPhone’s VoiceOver does, which is a popular accessibility feature for those that are visually impaired. And Samsung’s decision to go after Apple with this patent is under heavy fire today.

FOSSPatents was the first to break the news of the Mannheim Regional Court’s Judge Andreas Voss’ decision to stay the case. But I particularly liked AllThingsD’s John Paczkowski’s take on the situation. Here’s an excerpt:

“Yes, this move by Samsung against Apple was a tactical one in a nasty battle in which billions of dollars are at stake. Yes, it’s just business. But it’s ill-conceived. Even leaving aside the ethics of asserting a patent against a feature designed to help the blind, this is unwise. It’s the PR equivalent of punching yourself in the face. Samsung has now identified itself as a company willing to accept the loss of accessibility for the vision-impaired as collateral damage in its battle with Apple. It has made a big public move to make it more difficult for the blind to use computers.”

Now, you might be thinking, “if Apple can go after Samsung for having square devices with rounded corners, why can’t Samsung use its accessibility patent?” I’m not saying it can’t. But personal ethics aside, it’s a terrible PR move. And what makes it worse is, Samsung’s not just going after monetary damages. It’s going after device bans and injunctions.

Reached for comment, a Samsung spokesman told AllThingsD that it has “heavily invested in pioneering the development of technological innovations in the mobile industry,” and it will “continue to do what it takes to defend its property rights.”

What are your thoughts on all of this? Should Samsung be using its accessibility patent against Apple?