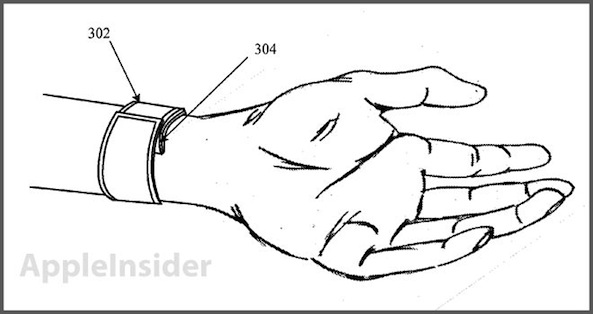 Ok, well if reports from The Wall Street Journal, The New York Times and Bloomberg didn’t convince you that the rumored ‘iWatch‘ project is real, maybe this will. A new Apple patent filing has surfaced for a wearable accessory with a flexible display.

Apple first filed its “Bi-stable spring with flexible display” patent application with the US Patent and Trademark Office back in August of 2011. And it describes a slap bracelet (remember those?)-like accessory with a full-length flexible touchscreen…

When active, Apple says that the unit can connect to a mobile device, like an iPhone, via Bluetooth or Wi-Fi. And it can show relevant information in real time on its flexible display like missed phone calls and messages, iPod playlists and controls, and more.

Here’s an excerpt from the filing (via AppleInsider):

“With a touch screen user input a user can accomplish a number of different tasks including adjusting the order of a current playlist, and reviewing a list of recent phone calls. A response to a current text message can even be managed given a simple virtual keyboard configuration across the face of the flexible display.”

Apple suggests embedding a wide range of sensors in its ‘slap bracelet’ (no seriously, it says that), including gyroscopes and accelerometers. It also mentions built-in ‘ambient light energy collectors,’ or tiny solar panels, to encourage less frequent charging.

As usual, just because this stuff shows up in a patent application, doesn’t guarantee that it’ll ever make it to market. But nevertheless, this is by far the most tangible evidence we’ve seen that Apple is working on an iPhone-compatible, wearable smart device.

And oddly enough, the device described in this filing sounds a lot more like a Nike Fuel band than it does a watch—which would honestly be fine by me. The less conspicuous something like this is, the better, which is where I think Google’s getting it wrong.