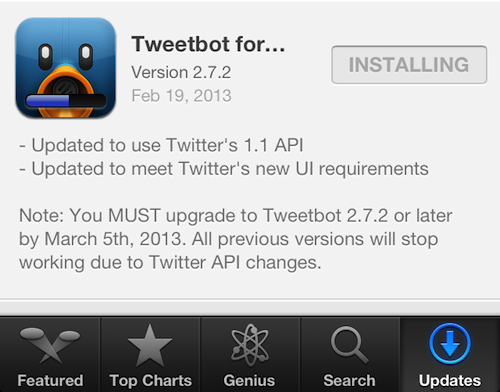 As many of you may know, Twitter announced a lengthy list of changes to its API used by third party clients last fall. The deadline for developers to meet the new requirements is March 5th, and apps that don’t comply will cease functioning.

As such, the Tapbots team has updated both its iOS and Mac Tweetbot apps today to adhere to the new API changes. Most of the them are under the hood, but you will notice some UI differences. We’ve got the full change logs after the fold…

The release notes for Tweetbot version 2.7.2 are minimal, and look identical for both the iPhone and iPad apps:

The developers also note that “You MUST upgrade to Tweetbot 2.7.2 or later by March 5th, 2013. All previous versions will stop working due to Twitter API changes.”

The release notes for the Mac app, however, are much more exciting, as its update includes several changes:

And again, Tapbots warns that users must update to Tweetbot 1.2 or later by March 5th, or it will stop working.

Twitter has come under a lot of fire lately for the way that it’s been treating its third party development community. These API changes are just the latest frustration. Last fall, it started limiting how many users outside clients could have.

At any rate, you’ll want to grab this latest Tweetbot update. The deadline’s still a few weeks away, but you might as well get it over with. Mac app users will especially want to update, as it actually includes a lot of solid improvements.