Making it big in mobile apps is getting tougher. That’s the finding from a company which researched how many new developers reach the top level at either Apple’s iOS App Store or Android’s Google Play. In fact, just two percent of first-time App Store developers enter the top 250 list of publishers while only slightly more – three percent – reach that level at Google Play.

As a result, three times as many “newcomers” to the app game publish for Google Play than the iOS App Store. According to analytics firm Distimo on average six Android apps are published for every two Apple titles. And the news doesn’t get much better for newbie app developers hoping to cash-in at either app store…

Just 0.25 percent of the revenue from the top 250 applications goes to new iPhone developers, according to Distimo.

Instead, the bounty goes to veteran app publishers with new titles. Some seventeen percent of the top 300 apps available in the iPhone App Store were new apps. For Android developers, twelve percent of the top applications were new.

According to the research firm, games topped the list of mobile apps at either the Apple App Store or Google Play. The single exception was Snapchat, the photo app which snagged top place in the Android store.

Video and photo apps were second to games in popularity, according to Distimo. 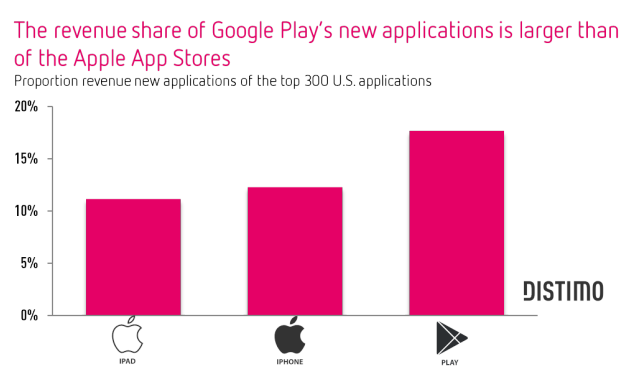 To show how easily it is for well-known publishers to earn downloads and cash, researchers found it took only a week for Angry Birds Star Wars to rake in $1 million while Google Maps had a million downloads in just days.

The majority of top apps were paid – half of those included in-app purchases. Only two free apps made it into the top 10 list. 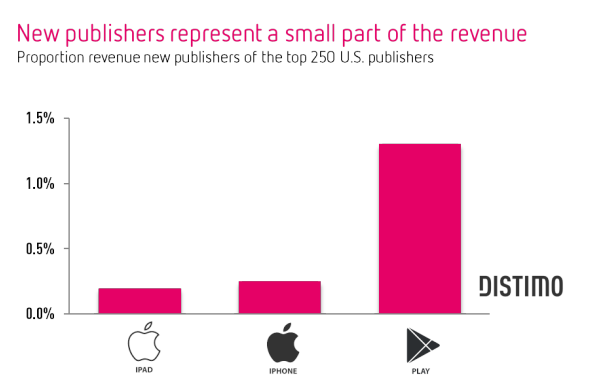 But how does this all affect Apple’s bottom line?

While Distimo speculates Apple’s stringent requirements for App Store approval may make developers to think twice, apparently  it’s not enough to make much of a difference.

As we reported last month, the App Store is earning three times that of Google Play.

Is the race to who passes one billionth app meaningless?

Indeed, how many apps does one need?