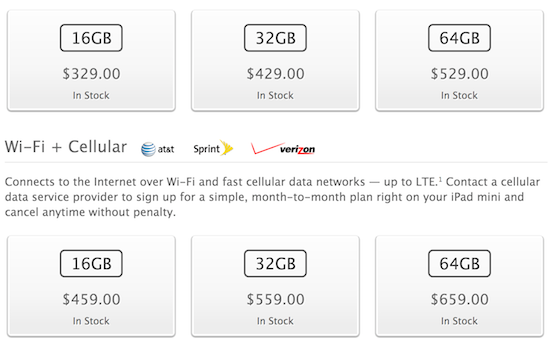 Apple has had a hard time catching up with consumer demand for its iPad mini. Since the tablet debuted four months ago, supply has been extremely constrained, with shipping times only recently dropping below a week.

But today, it appears that supply and demand is finally starting to even out for the popular slate, as the mini now shows an availability status of ‘in stock’ in Apple web stores in several countries around the world…

As noted by MacRumors, Apple’s online stores for the United States, Canada, Australia, Mexico and a number of other countries now show all iPad mini models as ‘in stock,’ meaning they are available for immediate shipping.

This marks the first time this has happened since the 7.9-inch tablet launched on November 2nd of last year. Initial pre-order stock sold out during opening weekend, and shipping times stayed around a month until January.

Although Apple has never confessed to what was causing the mini constraints, it was speculated last fall that the shortage was due to low yield rates of the tablet’s GF2 touchscreen tech. Obviously, whatever it was has been fixed.

Needless to say, the iPad mini has been a very successful product for Apple thus far, and rumors have already started flying about the next one. The latest reports allege that a Retina-equipped model is on track for an October launch.