Ive was honored with an exclusive golden Blue Peter badge and BBC’s presenter Barney Harwood sat down with him in his design bunker in California for a quick chat. Ive, a life-long Blue Peter fan, said the show was an “inspiration to children around the world” and recalled how they reused products that you thought were no longer useful.

By the way, notice those mean CNC machines behind Ive in the above clip (sorry, Flash-only – talk to BBC!)? That’s a pretty expensive piece of prototyping equipment Ive and his team use to experiment with materials and prototype various designs for future Apple gadgets…

Ive will appear in a gadget-themed special broadcast on the CBBC channel at 10am on Saturday, February 16, offering advice to the viewers.

As a mark of honour for the programme, Sir Jonathan and his team made ‘something very special‘, a unique Blue Peter badge crafted from solid aluminium through a 10-hour process, and presented it to Barney in true Blue Peter style saying, “Here’s one that we made earlier.” 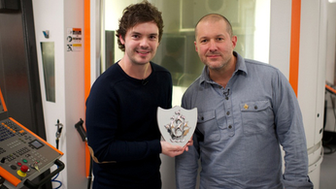 Only about a thousand gold badges have been presented in history and the honorees include David Beckham, JK Rowling, Tom Daley, Damian Hirst and The Queen herself.

Apple’s design chief was knighted at Buckingham Palace in May 2012 and told The Telegraph that Apple’s best designs are yet to come.

The famous designer was also shortlisted for the prestigious British Visionary Innovator award by the UK’s Intellectual Property Office in August 2012 and won numerous industry awards for his work at Apple.

I wonder if the solid aluminium Blue Peter badge Ive and his team made for the show says: “Designed by Apple in California” on the back.

In the special episode, Ive can be seen reviewing several product designs sent in by Blue Peter viewers through a series of video messages from the children behind the designs, BBC explains.

Sir Jonathan Ive is an inspiration to children around the world and we were ecstatic to hear his comments and design advice to our viewers who will remember such feedback for a lifetime.

The documentary covers today’s industrial design and features the famous German-born designer Dieter Rams (of the Braun fame) who called Apple the only company that takes design seriously.

Man, Apple is surely lucky to have Ive on its team…