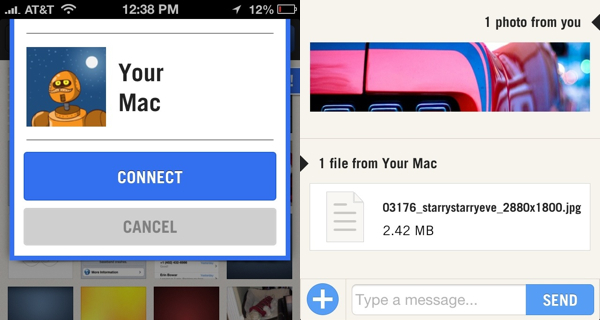 Bump has really come a long way since it debuted in the App Store back in 2009. The app, which once only allowed users to exchange contact information, now facilitates the sharing of photos, documents and even Dropbox files between mobile devices.

But the latest update looks to take Bump to a whole new level, with a revamped ‘Bump to PC’ feature. Users can now move files between their iPhones (or Android phones), and any computer, effectively turning their handsets into a personal flash drive…

Last May, Bump added a feature that let you send photos from your iPhone to your computer. But the transaction was only one way and limited to photos. With today’s update, though, it’s now possible to transfer any file to your computer, and vice versa.

Here’s a note from Bump CEO David Lieb on the company blog:

“Today we are updating the web version of Bump at http://bu.mp to be universally compatible with Bump on iOS and Android.  This means that starting today, everything you can bump between phones now also works both to and from any computer in the world.  Photos, videos, contacts, files…everything.  There’s no setup at all — just go to http://bu.mp on your computer, open Bump on your phone, and bump the spacebar key!  Bump is now your unlimited USB flash drive that is always with you!”

And the best part about this whole thing is that unlike traditional file sharing/syncing services like DropBox, Bump requires no setup. Simply open http://bu.mp in the web browser of any computer, open the Bump app on your phone, and tap your spacebar.

All in all, I think this is a killer move by Bump. I’m just hoping it works as well as its Photo-to-PC feature does. If you want to try it out for yourself, just grab the latest version of the Bump app from the App Store, and open up http://bu.mp on any computer.

What do you think of Bump’s new file sharing initiative?