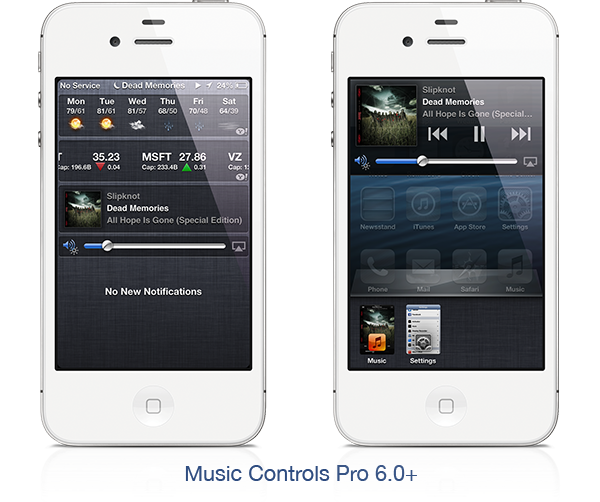 While the all new Music Controls Pro 6.0+ only has a fraction of the previous app’s capabilities, the price is currently discounted to $3.99 while the developers bring the new app up to speed. Currently Music Controls Pro includes swipe controls, Notification Center plugins for playback and volume, task switcher controls, and status bar integration for song titles. These are the core features that kept the original Music Controls Pro on my iPad in iOS 5.1.1…

Because of demand for Music Controls Pro 6.0+, phoenixdev’s authentication servers are currently down. Only the Notification Center plugins are partially working.

The features not currently in Music Controls Pro 6.0+ that are planned to be brought back soon include expanded support for third-party track info from other music apps, support to display ‘currently playing’ track information on a Bluetooth device, video app backgrounding, remote service, dock integration, and other tweaks like swapping the volume button while the screen is upside down. Since these features are mostly geared towards adding support for accessories, we hope to seem them reimplemented soon.

While phoenixdev’s servers are currently down at the time of writing, there is a free 5-day trial for testing out Music Controls Pro. Keep in mind that while the tweak is discounted to $3.99 for new users during the beta period, there have been reports of instability with the tweak. It might be a good idea to snag the tweak while it’s in beta and wait for it to mature before you install.

If you feel like you just purchased the old version of Music Controls Pro and are upset that phoenixdev released a new app, don’t grab your pitchforks just yet. If you purchased Music Controls Pro after January 2012, the new version is on the house. Older returning users still get a discount to $1.99.

Will you be using Music Controls Pro 6.0+? Share your thoughts in the comments.