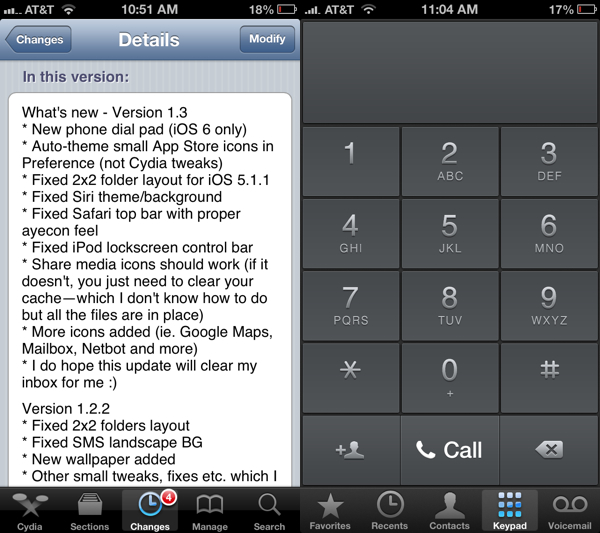 Since the evasi0n jailbreak was released last week, we’ve seen a wave of tweak and package updates as developers rush to fix remaining iOS 6 bugs and add new features. Today, our favorite theme joins in; ayecon 1.3 is now available in Cydia.

The update is fairly significant, as it includes a number of additions and improvements. There’s a new dial pad (for iOS 6+ only) and new icons for apps like Google Maps and Netbot. We’ve got the full change log for ayecon 1.3 after the fold…

My favorite thing about the update so far is the new phone dial pad. I think the darker-toned grey looks much better than the previous version—which I can hardly remember now. What was it, blue? Silver? At any rate, the new pad looks very sharp.

I also appreciate the fact that Surenix continues to add icons for new, popular apps. I don’t have Netbot, because I’m not sure I believe in App.Net as a platform yet. But I do have Mailbox and Google Maps, and I’m glad their icons now fit in with the others.

Finally, I hadn’t noticed any stability problems with the theme before updating. So I can’t speak to any of the bug fixes. But the new goodies alone are worth updating. Ayecon 1.3 is free for existing owners, and $2.99 in the BigBoss repo for everyone else.

What do you think of the new ayecon update?