The big takeaway here is that, under this new structure, iTunes can no longer be considered a ‘break even’ business. Because, as Dediu points out, the combined sales from iTunes and accessories is now bigger in terms of revenues than any other phone vendor, except for Samsung… 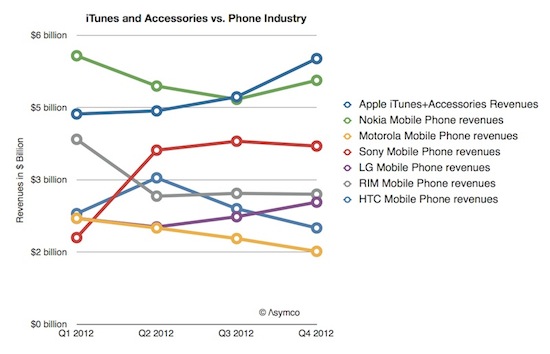 He explains that, as noted in its latest earnings release for the first fiscal quarter of 2013, Apple’s total revenues from iTunes and accessories amounted to over $5.5 billion. And that beats out total phone revenues of Nokia, Motorola, Sony, LG, BlackBerry (formerly RIM) and HTC.

The reason for the uptick? Well, the ‘iTunes’ revenue category is now a blend of many different business models. Music, which uses a wholesale revenue model, still has very low margins (if at all). The iBook and App Stores offer slightly better margins, as they use the agency revenue model where Apple gets a 30% cut. And the newly added Mac App Store, where Apple sells software like Final Cut Pro, provides higher margins.

Of course, this is all great news for Apple and its investors. iTunes now looks like a viable ‘stool leg’ business for Apple to rest on—one that will create steady and increasing revenue each quarter. It’s already surpassed the iPod, and it’s expected to pass the Mac sometime later this year.

And Apple’s accessory biz is nothing to scoff at either. It has several products in this space—one of which is the Apple TV, which has been on fire as of late. Tim Cook says that the company sold a record 2 million ATVs last quarter, and that it remains “an area of intense interest.”