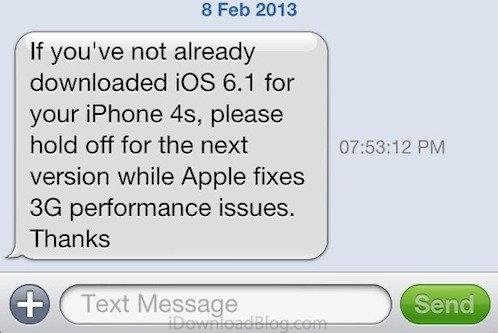 Over the past week or so, several users have come forward complaining about issues with iOS 6.1. Vodafone has actually told its iPhone 4S owners not to update to the software due to the problems, and AOL Corporate has had to turn off some Exchange services.

Well it looks like Apple is working to get these bugs fixed as soon as possible. A new report out this morning claims that carriers have already completed testing of iOS 6.1.1, and the 23MB firmware will be available in the near future as an over-the-air update…

Citing ‘sources who have been accurate in the past,’ German blog iFun (via 9to5Mac) reports:

So not only is the update going to change the firmware version to iOS 6.1.1, but it looks like it’s also going to upgrade the iPhone’s baseband to help fix the 3G problem. Obviously, if you’re on a jailbroken or unlocked (or both) handset, you’ll want to avoid this at all costs.

The latest version of evasi0n, 1.2, includes a feature that disables over-the-air updates. And we recommend that you either jailbreak with that from now on, or, if you’re already jailbroken, update the ‘evasi0n 6.0-6.1 Untether’ package in Cydia—it does the same thing.

You’ll also want to make sure you save your SHSH blobs for iOS 6.1, because Apple will stop signing the firmware shortly after 6.1.1 hits. And although pod2g says the first beta of the update didn’t patch evasi0n’s exploits, you don’t want to risk losing your jailbreak.

As usual, we’ll let you know as soon as iOS 6.1.1 is released, and keep you updated on its jailbreak status.