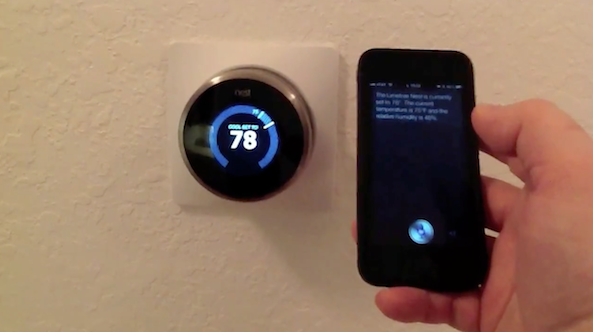 It seems like it’s been a while since we’ve seen any good SiriProxy hacks. If you recall, setting up Siri proxy servers to program Apple’s digital assistant to execute custom commands was all the rage last year. But the movement has since quieted down.

There’s a new video out, though, of a guy using Siri and a Rasberry Pi-based SiriProxy server to control almost everything in his house that may rekindle interest in the community. Watch him control his thermostat and TV, open his garage and more…

The video was created by YouTube user Elvis Impersonator (via The Next Web), who says that after purchasing an iPhone 5 and receiving a Rasberry Pi computer for Christmas, he spent a long weekend hacking together the system you see above.

And in an effort to help spur interest in the SiriProxy development community, he’s posted all of his plugins used in his project to his GitHub page. He’s also uploaded a card image with SiriProxy pre-installed, and shares a list of the components he uses:

So what possessed him to take on such a massive project? Well he says he started home automation and control in 2008. And once he saw SiriProxy for the first time in late 2011, he couldn’t stop dreaming of using voice commands to control his house.