When Apple announced the results for its 2012 holiday quarter, the reaction from Wall Street was extremely negative. Despite selling a record 48 million iPhones, and recording a record $54.5 billion in revenue, the company’s stock dropped more than 10% following the news.

A lot of folks have tried to explain the phenomenon—investors are worried about its slowing growth, or its ability to handle stronger competition from the likes of Google and Samsung. But the truth is, Apple is performing better than it ever has, and better than everyone else… 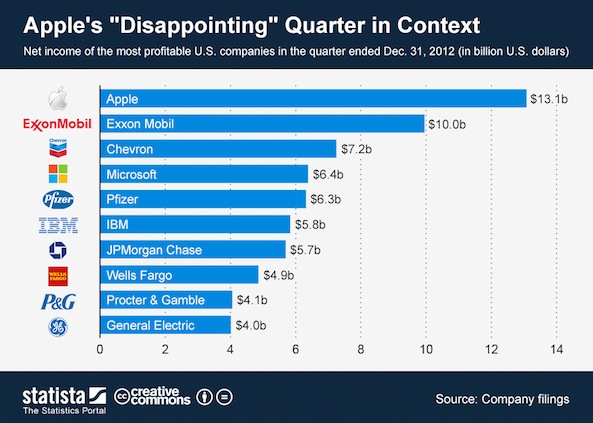 What you’re looking at here is a chart from statista, one of the leading statistics companies on the web, that shows the net income of the top 10 most profitable US companies during last year’s fourth quarter (or this year’s first fiscal quarter). And as you can see, Apple’s on top.

Apple’s $13.1 billion quarter was not only a record for the company, but was also one of the highest quarterly profits ever to be reported by any company—ever. As Tim Cook famously said in a recent Town Hall meeting, “the only companies that report better quarters pump oil.”

Statista breaks down the CEO’s statement:

“Historically, Tim Cook was right on that point: the only companies that ever reported a quarterly profit higher than Apple’s $13.1 billion are ExxonMobil and the Russian energy giant Gazprom, who reported net profit of $16.2 billion in the first quarter of 2011.
Looking at the short term though, even oil companies fail to deliver better quarters than Apple. In the December quarter, Apple earned $3 billion more than ExxonMobil, and at least $5 billion more than any other company in the United States. That includes oil companies such as Chevron, pharmaceutical companies such as Pfizer and financial institutions such as JPMorgan Chase.”

While it’s true that Apple’s beginning to slow down—and it was inevitable that it would at some point—you can see how the ‘doom’ reports are extremely exaggerated. With more than $130 billion in the bank and a bright 2013 ahead of it, Apple is still very much alive and well.