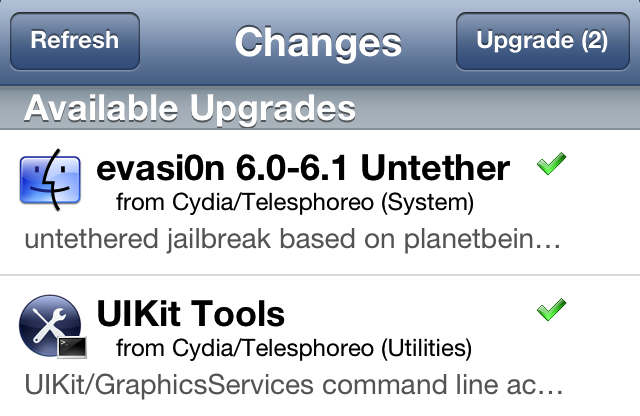 Some of you who used evasi0n to jailbreak their iPhone earlier this week might have encountered an issue where the Weather app would just crash at launch. The evad3rs were quick to identify the issue, and yesterday, they released a “manual” solution to fix the problem.

This fix, which we detailed and explained, required a bit of code manipulation, and was not really the easiest way to go at it. Fortunately, the evad3rs have now released and update that can be downloaded right from Cydia…

In order to fix the Weather issue (as well as the long reboot issue that was also reported by a few jailbreakers), go to Cydia, and hit the “Changes” tab. From there you should see the an upgrade available for UIKit Tools and for the evasi0n 6.0-6.1 Untether packages.

Upgrade both packages, and reboot your device. Not only your device should now reboot faster (assuming you had the long reboot issue), but your Weather app should also be fixed.

Once you’re done, please come back here and let us know how this worked for you by leaving a comment below.