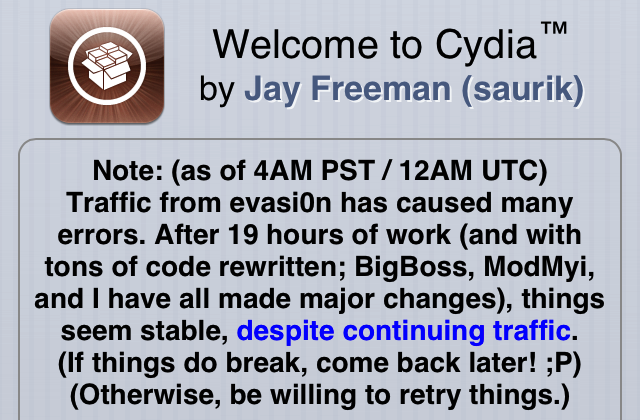 In the first 10 minutes that evasi0n was online, it had already been downloaded 100,000 times, an incredible number if you ask me. For those of you that aren’t impressed yet, Cydia’s saurik has shared some stats in an article published earlier today by Forbes.

According to saurik, Cydia was installed on over 1.7 million iOS devices since evasi0n was released yesterday…

In its first six hours online, the crack had already been used at least 800,000 times, according to Jay Freeman, administrator of the Cydia appstore for jailbreakers, and he says that’s a conservative estimate–his count was fouled up when the tsunami of traffic knocked his server offline several times over the course of the jailbreak’s first day online. By Tuesday his count was up to 1.7 million.

For the 3 or 4 of you reading this who haven’t jailbroken yet, make sure to check out our evasi0n for Mac guide, and our evasion for Windows tutorial.