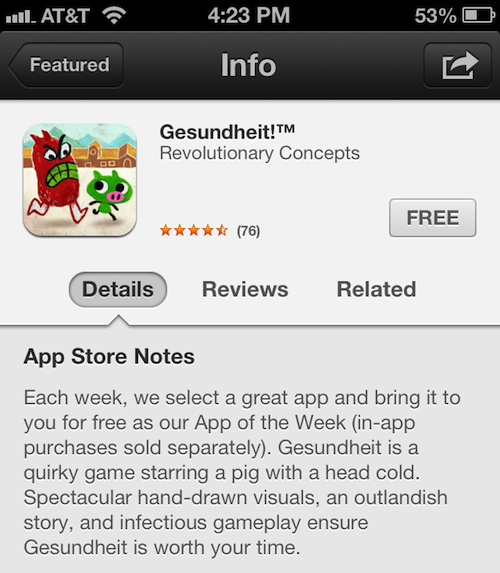 It’s been discovered this afternoon that Apple has quietly added a new section to the descriptions of its featured App Store apps. It’s called  ‘App Store Notes,’ and the area is used to provide a brief summary of each application.

Apple’s done something similar in the past, but it appears it’s now rolling out the feature on a broader scale…

Here’s an example of an App Store Note, via MacRumors, from Gesundheit, the App Store’s App of the Week:

“Each week, we select a great app and bring it to you for free as our App of the Week (in-app purchases sold separately). Gesundheit is a quirky game starring a pig with a head cold. Spectacular hand-draw visuals, am outlandish story, and infectious gameplay ensure Gesundheit is worth your time.”

The site points out that some other apps, such as those found in the ‘New and Noteworthy’ and ‘What’s Hot’ sections of the App Store, also have App Store Notes. Some have it, some don’t—it still seems pretty sporadic at this point.

The notes are actually quite helpful, as it’s sometimes difficult to figure out just what exactly an app or game is all about by digging through their lengthy descriptions. So I’d like to see this feature rolled out across all App Store sections.