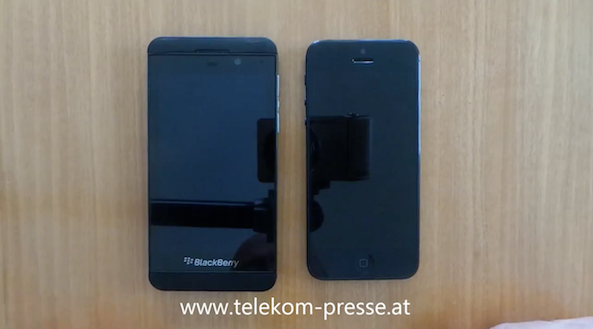 After what seems like years of waiting, we are now just 9 days away from RIM’s BlackBerry 10 launch event. Here, the Canadian company is expected to show off its ‘finished’ next-generation operating system, as well as its new devices that will be running it.

We already know that one of those devices will be the BlackBerry Z10, a high-end handset with a 4.2-inch display, because RIM has already passed out several of them. For those wondering how it will stack up against the iPhone 5, here’s a comparison video…

The video comes by way of TelekomPresse, a German tech blog. And despite the language barrier (my German is rusty), I think it does a great job of showing off the BlackBerry Z10, some of the features in the new BB10 OS, and how they compare with the iPhone 5.

Hardware-wise, they actually look very similar, except the Z10 has a larger 4.2-inch display, a mini HDMI port and a removable back and battery. Spec-wise, the BlackBerry is said to have a dual core processor, 2GB of RAM, an 8MP camera with automatic flash.

On the software side, I have to say that BlackBerry 10 looks impressive. From the card-view multitasking, to the notifications in the BlackBerry Hub, everything looks really cohesive. If you want a more in-depth look at BB10, BGR has a gallery of over 100 screenshots.

Everybody knows RIM’s story. Over the past 5 years, it’s gone from being the #1 smartphone-maker to being on the verge of bankruptcy, and it’s betting its entire company on this new BlackBerry 10 platform. Will it be enough to return it to glory? It’s too early to tell.

What do you think of BlackBerry 10 and the Z10 handset?