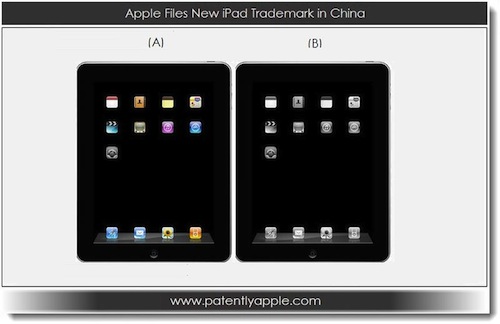 It’s been a busy couple of weeks for Apple in China. First there was Tim Cook’s visit, which involved meetings with government officials and China Mobile chairman Xi Guohua. Then there was the cellular iPad and iPad mini launch on Friday.

And now we know that Apple’s legal team applied for a new iPad trademark in China last week. They submitted the filing, which covers the likeness of the best-selling tablet, to the country’s Patent and Trademark Office on Friday…

The trademark application is #302495331, and its scope is extremely broad (via PatentlyApple):

It’s understandable that Apple would want to secure the likeness of its popular tablet, especially in China. As you may recall, the company spent the first half of last year fighting with Proview over an iPad trademark discrepancy in the country.

The dispute was actually very costly for Apple, who was forced to stop selling iPads for a short while in China. And in addition to that and the pile of legal fees, it ended up settling with Proview for far more than it wanted to, at $60 million.

If this trademark is awarded, not only would it help Apple defend against litigation, but it would also make it more effective in going after counterfeiters. As you know, China has long had a reputation for its abundance of counterfeit goods.