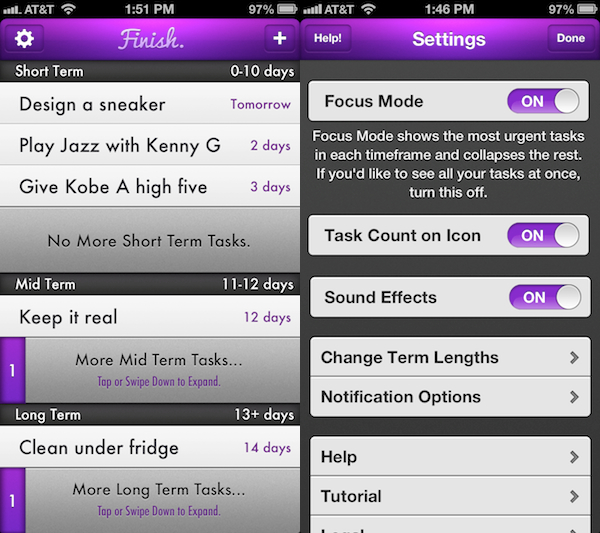 When it comes to getting stuff done — either around the house, or running errands — I’m one of the biggest procrastinators I know. I don’t mean to be. I’ve tried Clear, Wunderlist and other to-do list apps. And they’re all filled with long-overdue tasks.

So you can imagine my intrigue when I heard about the new Finish app, which bills itself as a timeframe-focused todo list that will help you “overcome the clutches of procrastination.” And since everyone seems to be talking about it, I had to try it out…

Interestingly enough, Finish was designed by a couple of high school kids, Ryan Orbuch and Michael Hansen. And their unique take on the todo app revolves around a simple formula that includes intuitive to-do entries and timeframe-based notifications.

Basically, it has you group all of your tasks into three categories: short-term, mid-term, and long-term. Short-term starts off at 0 to 10 days, mid-term at 11-12, and long-term at 13+ days. But obviously, any of these can be changed to better suit your needs.

That’s part one of the formula. Part two is called Focus Mode, which only shows you the most urgent chores in each timeframe, and collapses the rest. This way you don’t get overwhelmed by looking at a long, incomplete task list. Trust me, it can happen.

And that’s about it for Finish. It’s not nearly as feature-rich as other to-do list apps, and there’s no iPad version or iCloud sync. It does have a nice gesture-based UI and sharp graphics, though. I wouldn’t say it looks as good as Clear, but it’s certainly not ugly.

I’ve only been playing with the app for a few days now, and no, it hasn’t magically made me the most efficient person in the world. But I can see what all of the buzz is about, and would recommend it to anyone who wants to try a to-do list app that isn’t like the rest.

If you want to try Finish out for yourself, you can find it in the App Store for $0.99.

Have you tried Finish out yet? What to-do list app do you prefer?