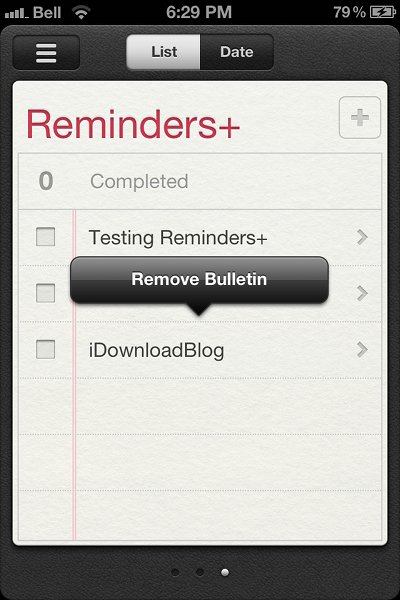 Reminders+ is a new jailbreak tweak recently added to Cydia that allows users to pin bulletins from Reminders+ to the lock screen. With the tweak installed, your reminders will stay on the lock screen; these notes won’t be dismissed if you unlock your iPhone or go into the Reminders app.

To pin notes on the lock screen, all you need to do is go into the Reminders app, find a reminder you want to pin down, and then press down on the text. An Action Menu prompt for adding a bulletin will appear on top of the selected reminder. Once you tap the prompt, the reminder will appear on your lock screen… 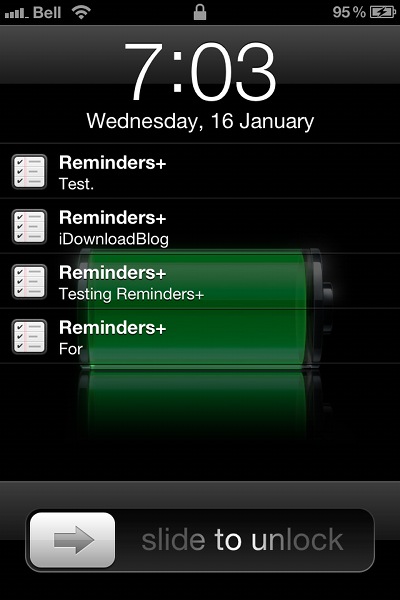 Unfortunately it’s not always easy to predict the order the notes will appear in.

My only complaint with Reminders+ is there is currently no way to dismiss a pinned reminder without going back into the Reminders app, holding down on the note, and pressing the Remove Bulletin button. While this might seem like just an annoyance, it’s possible to delete a reminder you’ve pinned without removing the bulletin, trapping it on the lock screen forever. You can actually see the trapped “test” dialog in the screenshot for this app. Having an option to wipe all pinned reminders would have been handy.

Overall, I think Reminders+ is a decent idea for a tweak because it expands on iOS’ existing Reminders functionality. I just hope there will be an update which will make it possible for users to bring trapped reminders back from limbo. Reminders+ can be downloaded for free from the BigBoss Repository in Cydia.