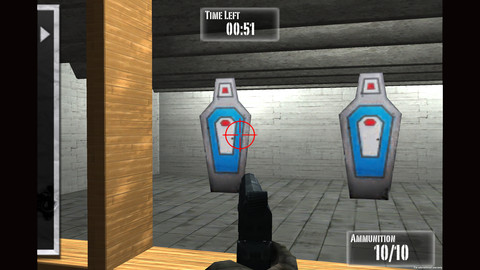 The National Rifle Association, a US organization that promotes firearm ownership, safety and self-defense, has released an app for iOS entitled NRA: Practice Range. The app contains several links to different NRA resources, but the focus is obviously on its built-in mini game.

The game itself isn’t anything special, it’s a shooting range that offers 3 gameplay modes: Indoor Range, Outdoor Range and Skeet Shoot. But what seems to be causing waves in the tech community today are its in-app assault weapons upgrades, and its ‘ages 4 and up’ App Store rating…

Here’s the description of the shooting range mini-game from the App Store:

NRA: Practice Range also offers a 3D shooting game that instills safe and responsible ownership through fun challenges and realistic simulations. It strikes the right balance of gaming and safety education, allowing you to enjoy the most authentic experience possible.

In the app’s defense, it does do a good job of promoting gun safety. I received a tip, for example: “Gun Safety Tip #5: Be sure the gun is safe to operate,” before every new round. But I can see why folks have an issue with its ‘4+’ age App Store rating (though doesn’t Apple have a hand in that?).

It also seems like an odd PR move, given the huge gun control debate going on in the country at the moment, and all of the criticism the NRA has taken over it. But I’m no expert. If you want to see what all of the controversy is about, you can find NRA: Practice Range in the App Store, for free.

What’s your take on the NRA’s new app?