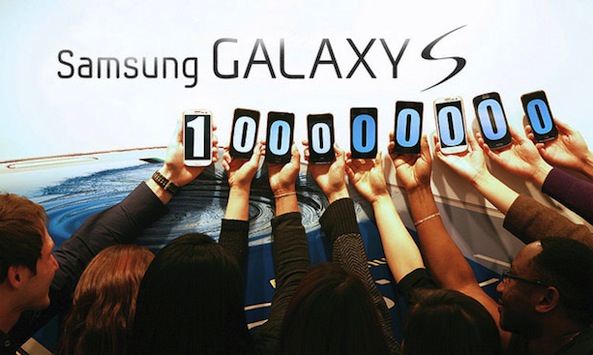 Hot on the heels of reports that Apple has had to cut iPhone 5 part orders due to weaker-than-expected demand, Samsung has announced that its handset sales are still flourishing.

It appears that the Korean company’s popular line of Galaxy S smartphones has recently reached a major milestone, crossing the 100 million unit mark in less than three years…

Last night, Samsung posted the above image on its Flickr account (via Engadget) along with the following message:

“Samsung Electronics’ flagship Galaxy S series surpassed the accumulated sales record of 100 million units from the supply side in only 2 years and 7 months after its launch in May 2010. Galaxy S III is selling at much faster rate of 30 million in 5 months and 40 million in 7 months, after becoming a million seller in only 50 days after its release last May. Currently, its average daily sales are 190,000 units. The driving force behind Samsung Electronics’ rise to the top on the global smartphone market is Galaxy S II which is gaining ground as a steady seller hitting the sales of over 40 million in only 20 months.”

In fact, when it comes to Android partners, Samsung seems to be the only one making money. HTC just posted its fifth consecutive quarterly loss in net profit, and Motorola was in a similar boat before its Google buyout.

Samsung’s clearly found a way to set itself apart from the other Android manufacturers, and even Apple. The latest ComScore data shows that it has at least a 10% lead in US mobile marketshare over everyone else.

So what’s next for the Galaxy S line? Well, Samsung has a press event coming up on February 23 that would be perfect for a Galaxy S4. And if there’s any truth to the rumors, we’ll see Apple’s response shortly after.

Why do you think Samsung has seen so much success with its Galaxy S line?