Keycard from Appuous is a nifty new app which keeps your Mac secure by locking your OS X user account automatically when you’re not around. It does this by using your Bluetooth connection to check for your iPhone or iPad’s presence, thereby detecting when you’ve stepped away from your computer or returned to it. Of course, unless you remember to take the paired device with you, Keycard won’t be up for the task.

On the surface, the idea seems pretty useful as the app turns your iOS device into a personal ‘keycard’ of sorts. However, it isn’t without pitfalls and the flashy promo video doesn’t mention the fine print. I installed the program and after spending a few minutes with it immediately noticed a couple issues you should be aware of…

On the Mac side, you’ll need to install the Keycard app from the Mac App Store, which costs seven bucks (for a limited time only, the normal price is $9).

Next, use it to pair your Mac with your iOS device(s) that will act as your keycard(s). You only need do to this on your Mac. On your iOS device, just open the Settings app, enable Bluetooth and leave the app open until Keycard recognizes it.

Once the device have been successfully paired, the program sits in your Mac’s menu bar and checks over Bluetooth if your ‘keycards’ – that is, your paired mobile devices – are present. When it detects a broken connection, like when you walk away from your Mac with your iPhone in your pocket, it will lock itself automatically. 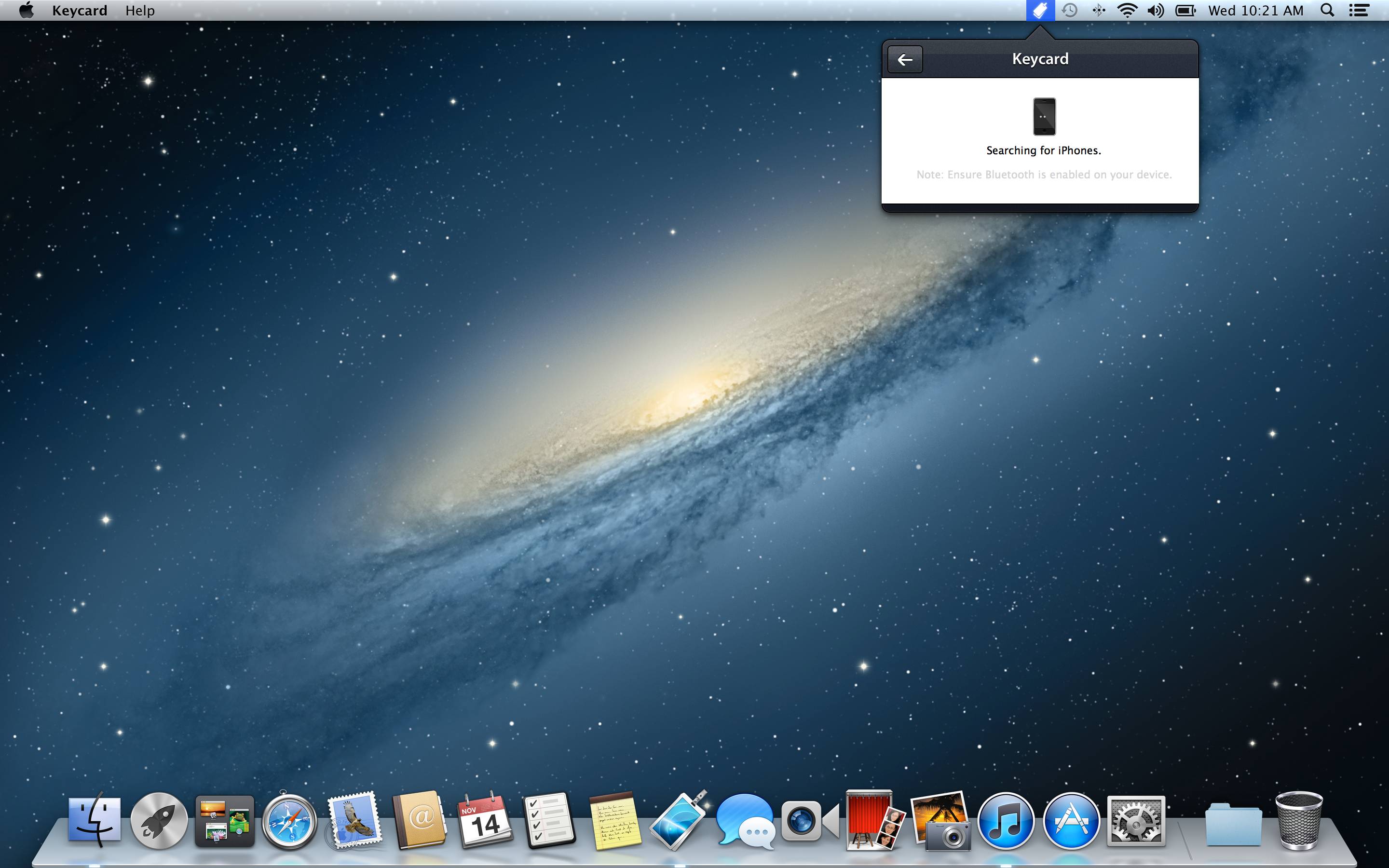 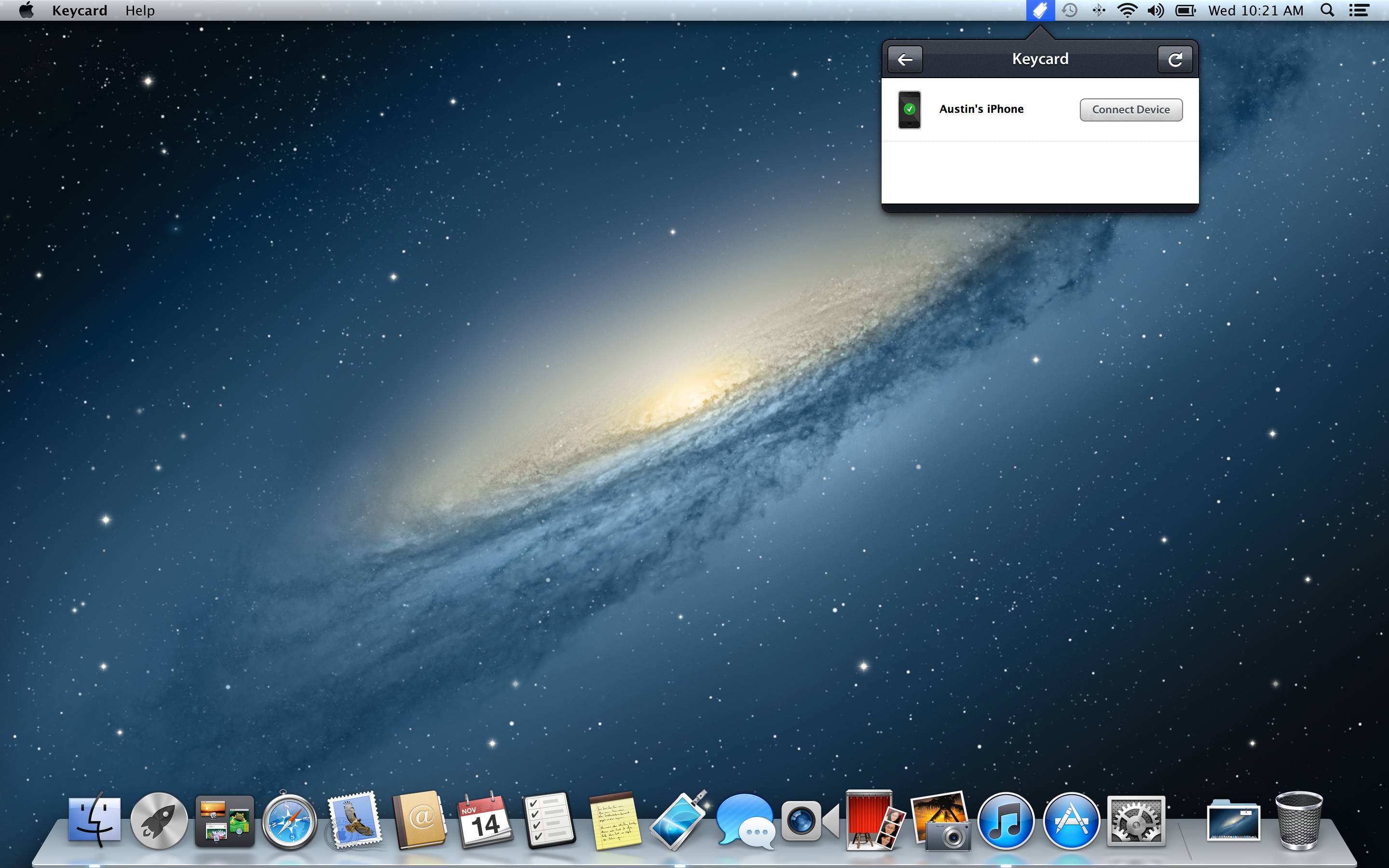 Unfortunately, situations when Bluetooth for some reason might not be available lend themselves nicely to unwanted scenarios where you’re unable to unlock your Mac. To prevent this from happening, the user is wholeheartedly recommended to set up a four-digit PIN code in order to be able to unlock their Mac manually, if needed. 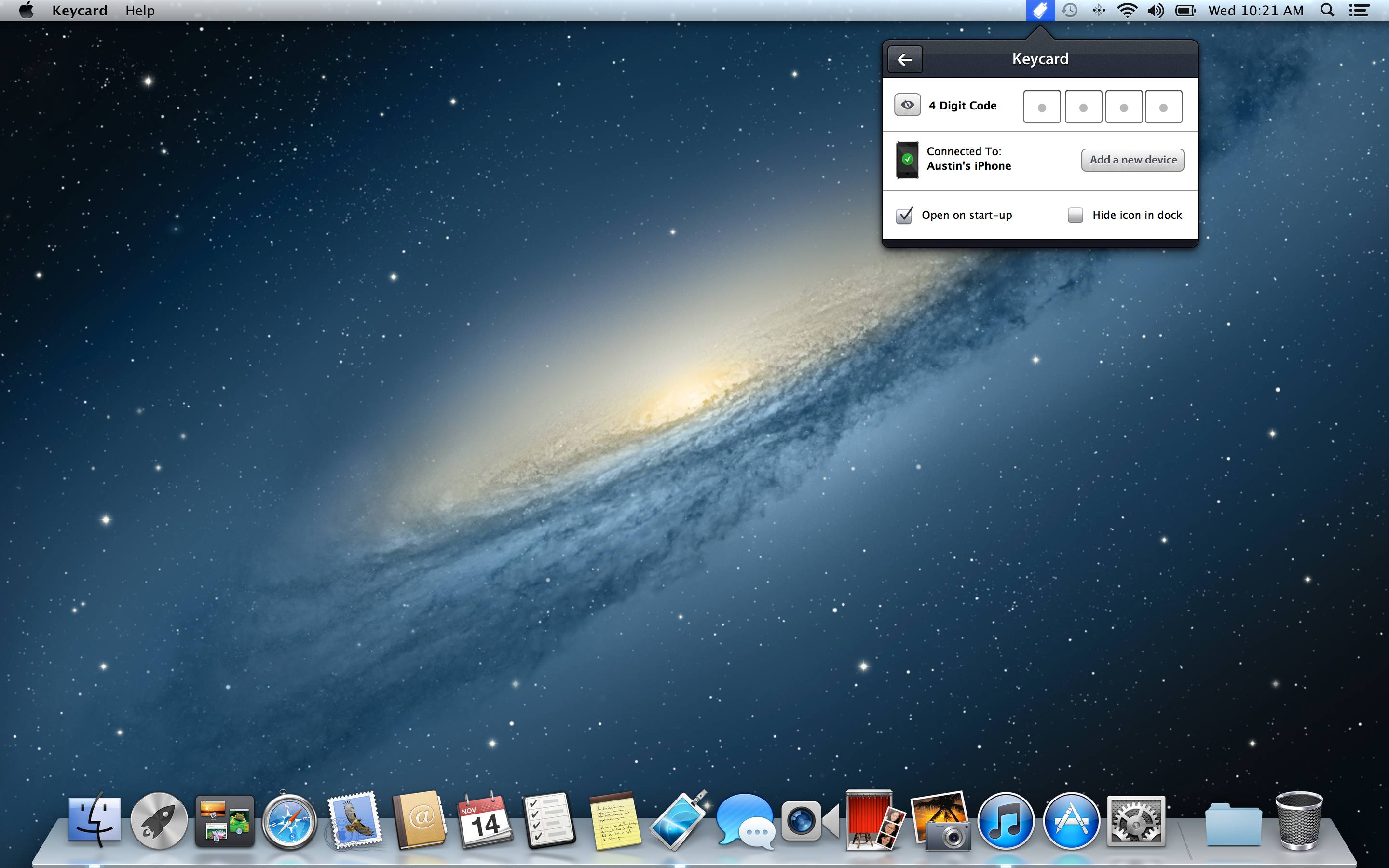 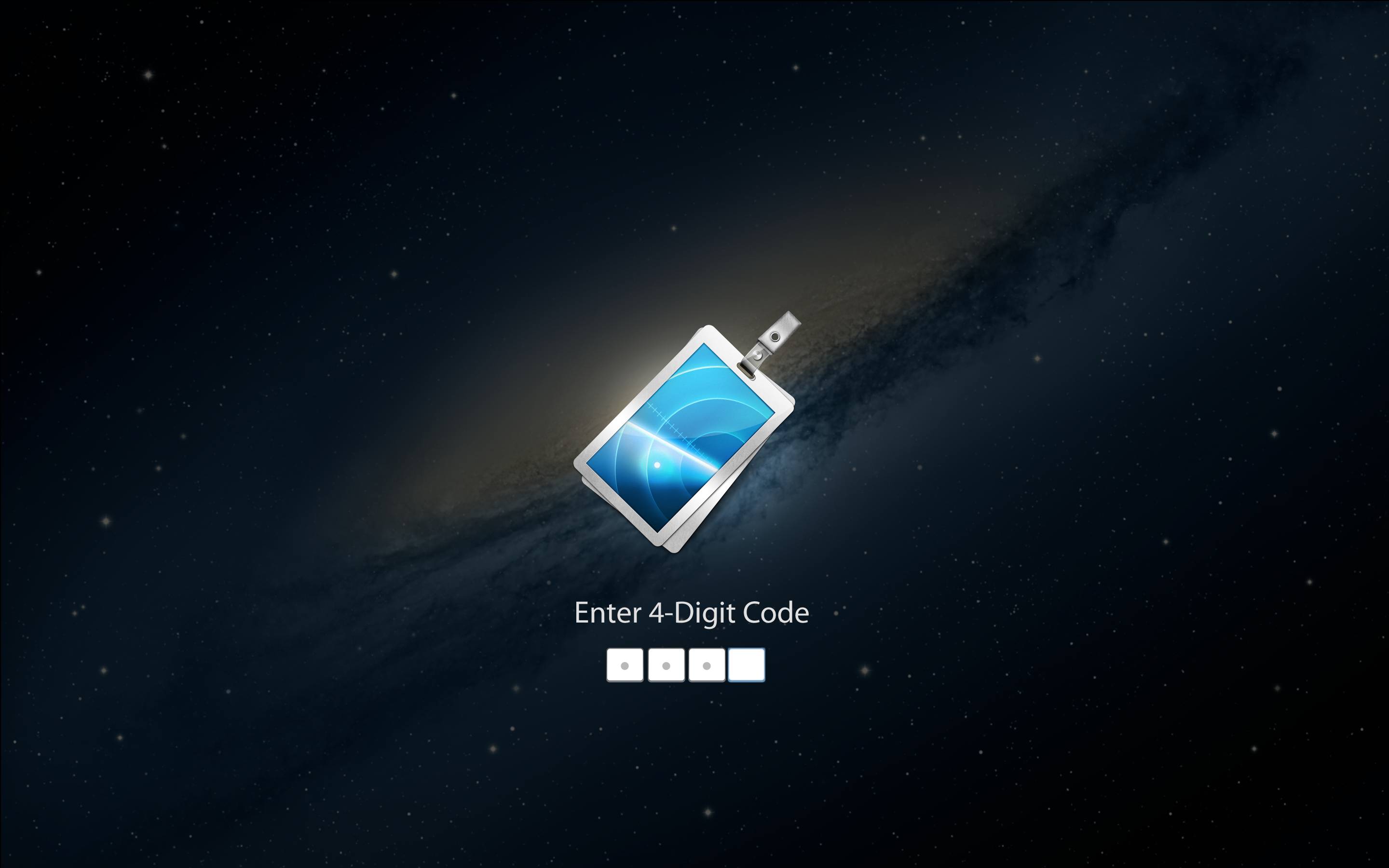 However, upon checking iTunes reviews, I immediately became aware of Keycard’s other issues.

This has not worked once for me. I’m using an iPhone 5 with a 2012 iMac. It paired with my iPhone, I walk away 50+ ft., leave my phone, come back without my phone as a test, screen is on and unlocked.

Now, Bluetooth can behave erratically and unreliably on the Mac side, but obviously that’s what the PIN code is for.

Appuous acknowledges “some bugs” in the initial 1.0 release and says it’s already working on fixing them in the 1.1 release. If you were wondering, connection hiccups are happening because “the default trigger range for Keycard is extremely sensitive and when the signal is strong, it’ll trigger the lock”.

As a workaround solution, try re-installing Keycard or re-pair your iOS device with the app, like this:

Having Keycard open at start-up can also create a mess so best thing you avoid adding it as a start-up item in the first place, at least until a new version comes out which will provide this option as a setting within the program.

Another reviewer hinted at the larger set of problems with Keycard’s design:

The website says “It detects when you are leaving your computer”, the video even suggest that it locks as you are leaving, and that’s not true. It will not lock until you are out of Bluetooth range, so for me that was 45ft+. That’s further range than my Bluetooth speakers work, but figure this need a smallest amount of Bluetooth reception, it works way too far away.

The video and text lead you to believe it is smart, that is can tell when you are walking out of your room or away from your Mac. Not true. I can walk out my office, into my bedroom, which is a few rooms away, and it stays on. The only time it locked was when I walked down the stairs, across a living room and out the back door.

As these people are using newer Macs and iOS device, clearly the increased range of Bluetooth 4.0 is affecting usability of the software.

“Maybe it should say: ‘Locks when you leave your house'”, another reviewer joked. 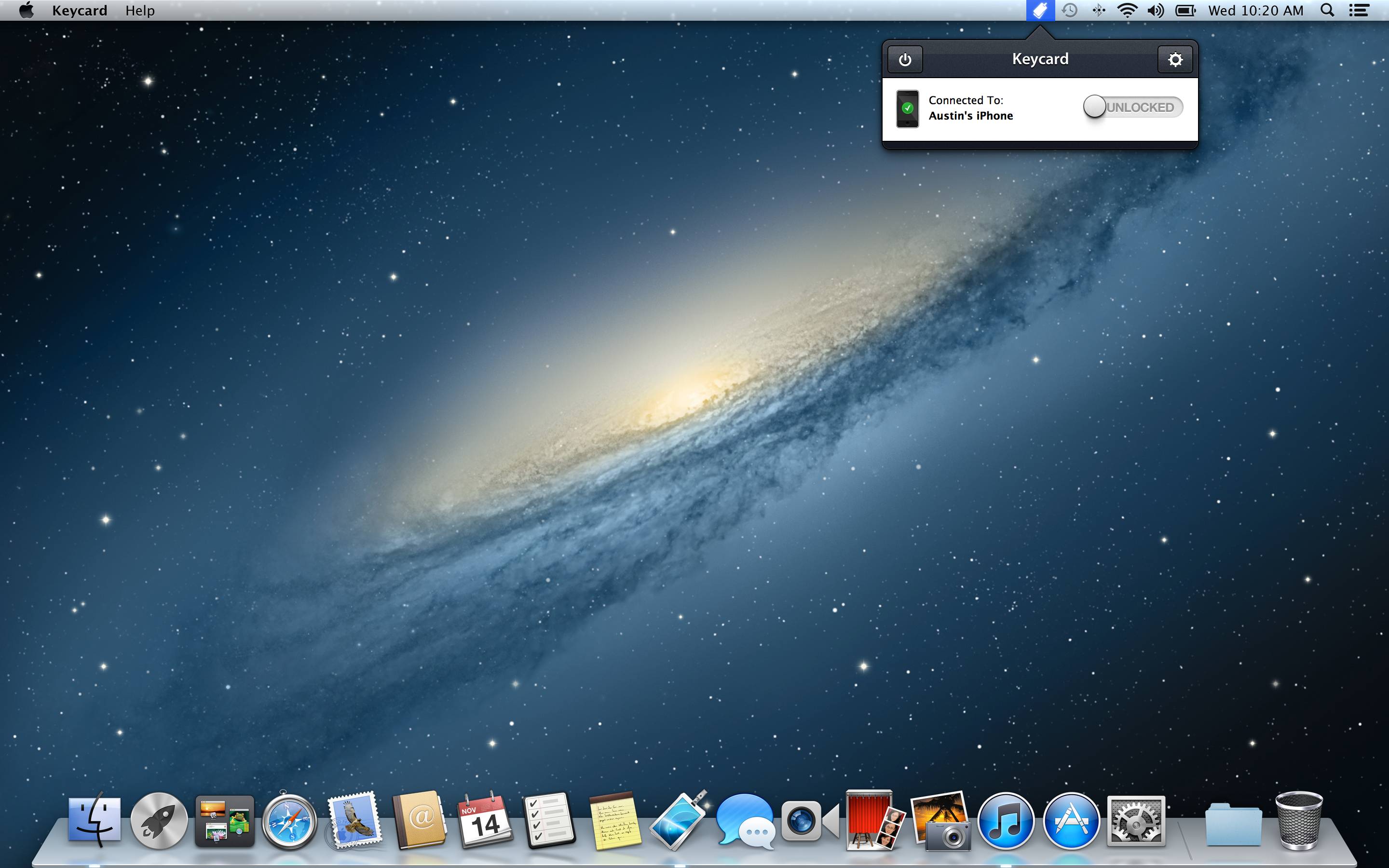 Matt Brian of The Next Web agrees as much:

Even if Bluetooth can be fiddly beast at the best of times, it would still be nice to if Keycard could offer settings that allow you tune it to be less or more sensitive of the distance between a Mac and a mobile device. I’d like for it to lock the minute I walked 2 meters away from my Mac, not the back of my garden (which is what I was experiencing when I first tested it).

Keycard is a really helpful little tool that works best if you dash between offices or need to be away from your Mac a lot during the day and is available for $6.99/£4.99 on Apple’s Mac App Store.

While Keycard’s approach to the Mac’s security has potential, the execution leaves something to be desired.

That’s not to say the app isn’t any good – it is, but it also needs more work.

Appuous should implement a range preference setting that should be tied to Bluetooth signal strength. As is, Keycard is lacking because those whose apartment or dorm room is in the maximum range of Bluetooth 4.0 – which is 100ft, or up to 30 meters – won’t have much use for it.

If you’re interested in Keycard, you should probably wait until devs work out the kinks present in the initial release before taking the plunge.

More information can be found at the official web site.