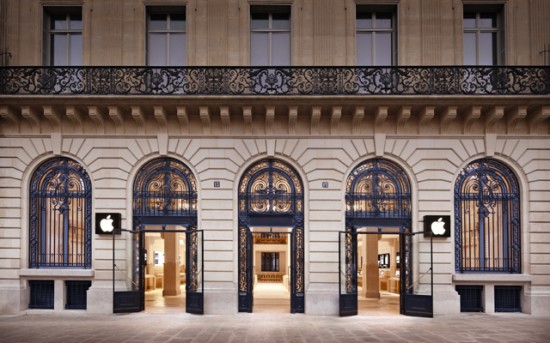 While much of the world spent yesterday recovering from dehydration and hangovers, Apple was dealing with a different kind of headache. You know, the type of headache you get when someone steals over a million dollars in merchandise from you.

That’s right, in what sounds like a rejected Ocean’s 11 plot, the Apple Store in Paris’s Opera district was robbed at gunpoint on New Year’s Eve. And the masked thieves are believed to have made off with more than a million dollars in stolen products…

“Reports claimed the thieves, armed with handguns, made off with as much as one million euros (£780,000) worth of products, although police would not confirm the total, noting that the store’s director was still processing the lost inventory.

Masked men forced their way into a back entrance around 9pm, three hours after the store closed, as a janitor was leaving. The janitor was “lightly injured” in the process.”

Apple Stores are often targeted for “smash and grab” jobs, where thieves break-in through the signature glass walls and take device displays, and other floor items. This time, however, the criminals went for the stock room, making for a much bigger score.

Four or five men are believed to be have been involved in the robbery. Accomplices waited in a nearby, parked truck, in which the goods were loaded, and a successful getaway was made around 9:40pm — meaning the entire job took around 40 minutes.

“They prepared their coup pretty well,” said Christophe Crépin, a representative of the French police union Unsa, noting that it was relatively easy to escape, because large boulevards near the store situated just behind the Palais Garnier opera house, led to several different parts of the city. In addition, “since the essential bulk of police forces were mobilised to patrol the Champs-Elysées, the thieves clearly profited from the opportunity to make their move,” Mr Crépin added.”

Paris police have since denied claims that there was a shortage in security in the Opera district the night of the robbery. A police source told The Telegraph that New Year’s Eve celebrations didn’t “intervene at all with the regular security on duty.”

While the thieves are still at large, A video of the robbery is expected to provide helpful clues. For the moment, though, this is the largest burglary of Apple products we’ve seen since $1.5 million in iPad minis were stolen from JFK airport back in November.