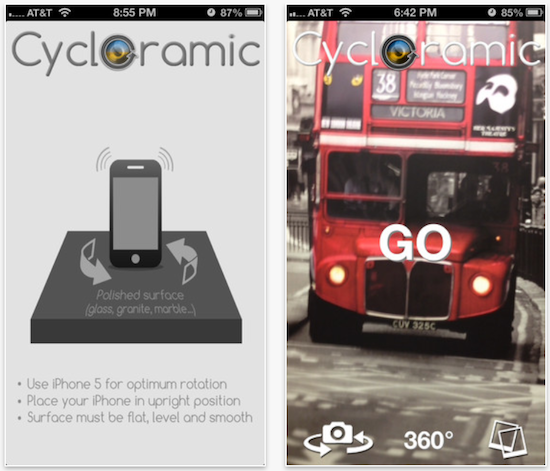 Up until now, if you wanted to shoot 360-degree video with your iPhone, you’d either need a snap-on accessory, like the GoPano, or a pair of steady hands and some patience. But a clever new app is looking to change that.

Introducing Cycloramic, an iPhone app that uses the handset’s built-in vibrate motor to spin it around in a circle, allowing you to capture 360-degree video, completely hands free. Hard to believe? Check out the video demo…

The concept here is pretty simple. After loading up the app on your iPhone, you must balance the handset upright on a flat surface — as you can imagine, it has to be really flat for this to work — and press the “GO” button.

Cycloramic works its magic by making the phone vibrate at just the right frequencies to force it into a steady a twirl. And the handset will continue to spin in a circle, while recording video, until you press the “STOP” button.

Your phone must be set to vibrate, on both Silent and Ring profiles, for the app to function properly. And while the app is compatible with the iPhone 4 and 4S, they don’t tend to spin as well as the iPhone 5 due to their sizes.

If you want to check out Cycloramic for yourself, you can find it in the App Store for $0.99.

What do you think of Cycloramic? Ingenious idea, or just a gimmick?