A lot has been said about Apple’s exclusive multi-year license for Liquidmetal, an amorphous Terminator-like alloy made from zirconium, titanium, nickel, copper and other materials. Liquidmetal is stronger, smoother and more corrosion-resistant than aluminum, but Apple is not expected to deploy it across its products until 2017.

In the meantime, here’s a nice example of how the alloy might pave the way for new industrial designs. What you see in the above clip are conductive wires that can be stretched up to eight times their original length while still functioning, thanks to Liquidmetal that’s twice as strong as Titanium and possesses the processability of plastics…

What’s best, Liquidmetal wires can be produced on a mass scale without having to develop new manufacturing processes.

The only downer: the alloy will leak out if you break the cable.

The method fills an elastic polymer tube with a liquid gallium and indium alloy that delivers the electricity. By keeping the materials separate, unlike many past attempts, the solution promises the best of both worlds: the conduction we need, and the tolerance for tugs that we want.

These wires can be used for everything from headphones to phone chargers and hold potential for use in electronic textiles, according to researchers from North Carolina State University who published their work in a paper titled “Ultrastretchable Fibers with Metallic Conductivity Using a Liquid Metal Alloy Core” and published online in Advanced Functional Materials. 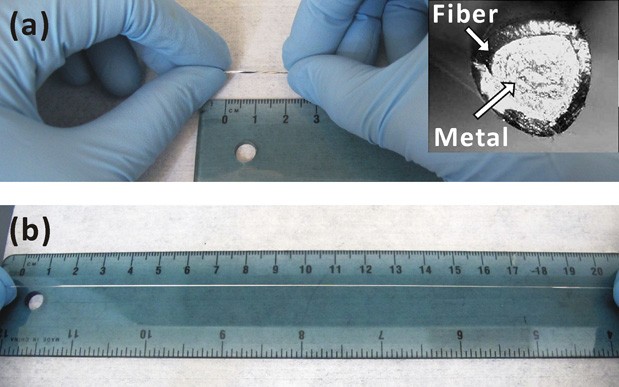 The tube is filled with Liquidmetal and can be stretched up to 8x its original length.

“Increasing the amount of metal improves the conductivity of the composite, but diminishes its elasticity,” Dickey says. “Our approach keeps the materials separate, so you have maximum conductivity without impairing elasticity.

Of course, Apple is expected to use Liquidmetal in a big way because the company holds an exclusive worldwide license to use the alloy in consumer electronics products.

The only time Apple used Liquidmetal in a product was the SIM ejector tool that shipped with the iPhone 3GS.