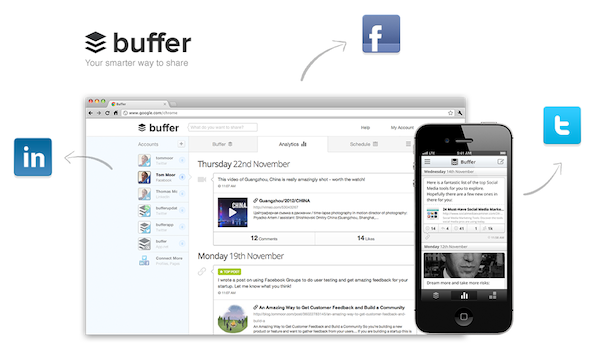 Buffer has lived on the App Store for twelve months now, after being a web-only affair until then. A year after its iOS debut, the folks at Buffer have given the service an overhaul, giving the iOS app a fresh lick of paint in the process.

Originally born as a way of scheduling Tweets for publishing at a later date or time, Buffer has now expanded its scope to take in more of the social media landscape. Both Facebook and LinkedIn are now present in Buffer’s list of supported networks, and the newly redesigned iOS and web apps are gorgeous (and they weren’t too bad before).

The most obvious reason for scheduling your social media activity is time zones. If you live in the UK, for example, but want to make sure a particular tweet lands at a time those in the United States will see it, then Buffer is what you should be using.  There’s nothing worse than an awesome tweet or update going unread, just because your target audience is asleep!

The new buffer iOS app makes scheduling updates a trivial task. You can type your update in and then choose which of your social networks it is posted to. Right now, the scheduling is all done on the Buffer website, but we’re told in-app editing of schedules is on the way.

Buffer is growing, too. There are fancy analytics that can be done on your updates, telling you roughly what kind of reach they will have, and you can now add media to your updates also – something previously impossible.

Buffer is also finding its way into other apps. Reeder, for example, now supports adding articles to buffered updates. There are a whole host of apps beginning to inforporate Buffer, so now’s the time to get an account all set up and start Buffering!

Our only complaint? We’d like to be able to schedule updates for any time and day, rather than being tied to schedules. Here’s hoping that’s a feature high on Buffer’s to-do list!