Google today announced some welcome (if not way overdue) changes to its free news aggregator platform, Google News. The enhancements are aimed specifically at Apple’s iPad and, of course, Google’s own Nexus tablets and include new gestures and more breathing room between articles, which de-clutters the interface. If you used to dislike Google News because it threw every link it could at you, give the updated web app another try as it does feel more natural and fluid on iPads than before…

Per Google’s blog post, the web-based software makes better use of gestures:

You can find new articles, news sources, and even topics of interest with intuitive gestures. Swipe horizontally between sections – from Business to Entertainment, for example – or tap “Explore in depth” to see multiple articles and other info related to a particular story.

This is what the new UI looks like on an iPad. 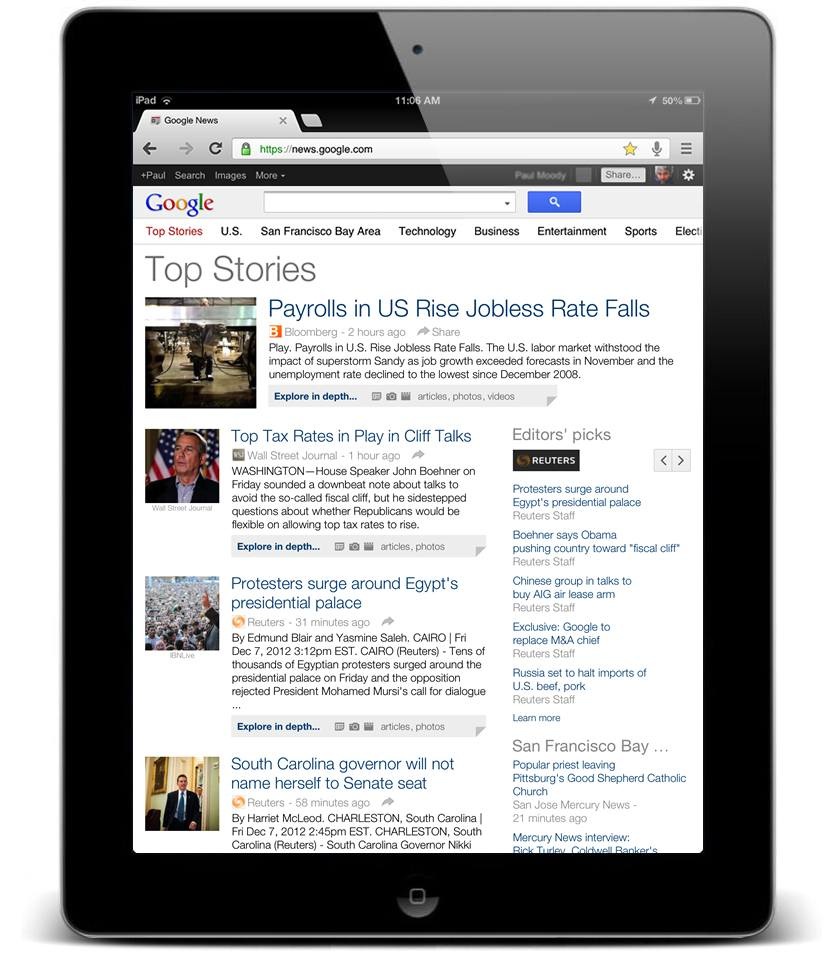 The Next Web has a feeling “Google didn’t bother testing on tablets other than its own and Apple’s”.

I can confirm that the new interface was live on my iPad and Nexus 7 at press time. If it means anything, Google’s blog post specifically mentions only the iPad and Nexus tablets.

The company is rolling out the new experience in the US over the next few days so so don’t freak out if opening news.google.com in the Safari browser still yields the old, fugly interface.

Being in the blogging business, I’m sure Google News is no longer the de facto source for breaking news on the web. Back in the Digg days, getting onto Google News’ Technology section was paramount in terms of page views and ad revenue.

That’s no longer the case.

For starters, Google News is way too slow.

I source my news from Twitter these days, via apps such as Flipboard and through various other social media channels where most of us talk about anything and everything.

While I still consult Google News here and there, it’s just for an overview of a day’s worth of news.

When was the last time you browsed Google News?