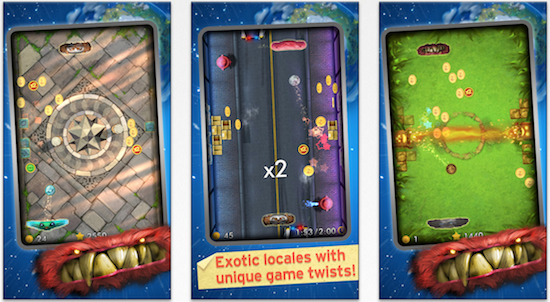 Atari’s Pong video game is arguably one of the most recognizable titles of all time. It first debuted as an arcade game back in 1972, and was later ported to home consoles. And since then, it’s been emulated and copied countless times.

Well yesterday, in light of the game’s 40-year anniversary, Atari released a new version of the timeless classic for iOS called Pong World. And with characters like Chompers and Sir Bouncelot, this isn’t your average 2D tennis match…

“Pong World introduces a new generation to the classic game of PONG® with a dazzling unique twist and colorful new look. Explore Pong World by defeating opponents while collecting all five paddle creatures; Shaggy, Chompers, Sir Bouncelot, Razzle and Gnop to help you in your journey for domination. Each paddle is equipped with unique upgrades and powers. Unlock 4 different locations, each equipped with unique features — summon a wall of energy to block your opponent’s ball, hinder your enemy’s vision and much more!”

Pong world features three gameplay modes: Conquest, Survival and Two-Player Battle. There are four unique levels to play and a total of 5 paddle creatures — each with their own traits — that you can collect and upgrade along your journey.

If this all sounds too out-there for you, you can always play the classic Pong game in Atari’s Greatest Hits. But for those of you who want to try something new, you can find Pong World, for both the iPhone and iPad, in the App Store for free.

Have you tried Pong World yet? Thoughts?