If you’ve played Angry Birds Star Wars through and are yearning for more, check out the first content update, now available for download. Expanding on the initial levels on planet Tatooine and the Death Star, this content update contains new levels set on the icy planet of Hoth. Another surprise: Pink Bird debuts as Princess Leia. Also, looks like there are some AT-AT walkers to take down and pigtroopers to fight, too…

“We can already sense a great disturbance in The Force”, Rovio writes. “And app stores worldwide”.

As mentioned, the content update contains twenty new levels set on the ice world of Hoth.

Gamers can also discover two unlockable levels and, as a bonus, enjoy the pink bird which stars as Princess Leia who, according to the game, has “an ATTRACTIVE new power”.

It is a dark time for the Rebellion. Evading the dreaded Imperial Starfleet, a group of freedom fighters has established a new secret base on the remote ice world of Hoth.

Unfortunately the evil Lord Vader discovers their hideout, and the desperate Rebel birds must escape the AT-ATs and Pigtroopers hot on their trail.

But the Rebels have an ace up their sleeve with the debut of PRINCESS LEIA and her attractive new power!

A pair of Hoth screenies for you. 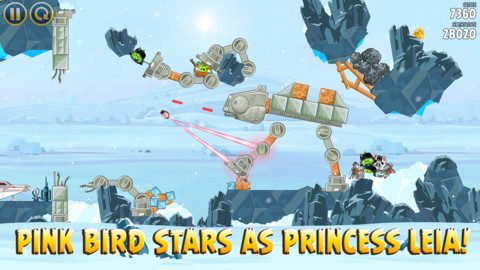 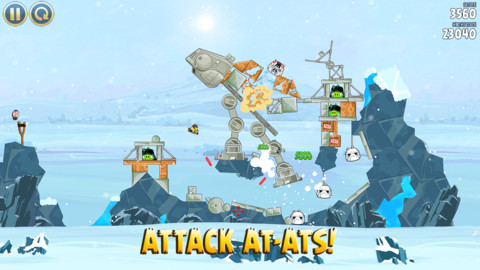 And this is a Hoth teaser.

The Hoth level pack is a free update to those who purchased the game.

To keep tabs on the latest about the game, head over to the official Angry Birds Star Wars Tumblr page.