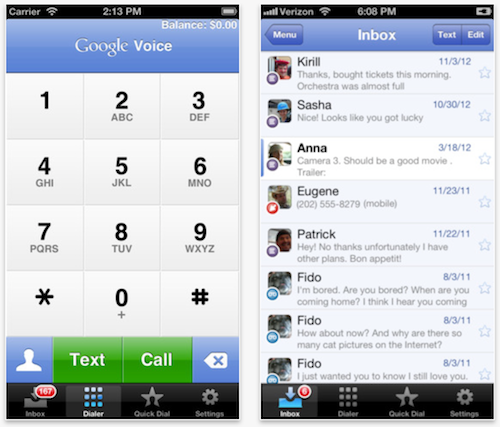 Google Voice users will be happy to hear that Google has finally updated its iOS client to support iOS 6 and the new 4-inch display on the iPhone 5 and 5th generation iPod touch. The update comes more than 2 months after Apple released version 6 of its mobile OS to the public. So needless to say, this was long overdue…

As most of you know, the Google Voice app for iOS gives you access to your Google Voice account from your iPhone, iPad and iPod Touch. The US-only service allows you to make phone calls , send free text messages, make low-cost international calls and listen to voicemails with transcription, right from your mobile device.

Outside of the new support for iOS 6, the stretched UI and a couple of bug fixes, there aren’t any other changes in this update. But frequent users of the app who are on the iPhone 5 will be happy to download it. As usual, you can find it in the App Store, for free. It’s also worth noting that the app now requires iOS 4.3 or higher.