Apple appears to be resolving its legal woes with other Android backers such as HTC, reportedly seeking arbitration and even mulling a global settlement with Google’s subsidiary Motorola Mobility. On the other hand, the company is to this date entangled in a complicated web of patent disputes with Samsung, from whom it sources components for iOS devices.

And as the frenemies seek to add new gadgets to their respective list of infringing products, one analyst believes Apple’s hostile tactics has forced the Galaxy maker to divert from its original business strategy. As a result, the component arm of the South Korean conglomerate has become “more assertive” in price negotiations with Apple, refusing to invest billions of dollars in plants and manufacturing technology without long-term commitment from Apple…

Matter of fact, because of the legal battle the supply chain part of the rocky Apple-Samsung relationship has grown more complex, up to the point where Samsung refuses to commit big bucks in capital expenditure.

Bernstein Research analyst Mark Newman believes (via Barron’s) that possibly in response to Apple’s hostile tactics, Samsung has become “noticeably more conservative” in capex and “more assertive” in price negotiations on the component side.

The point of contention: profits and returns, which are now more important to Samsung than share gains, the analyst writes.

He vividly explains how the legal standoff affects the supply chain side of the business:

Apple requires more capacity for its custom processors that are exclusively made by Samsung. However, without long-term commitment beyond end of 2013, Samsung is refusing to spend literally billions of dollars.

The risk for Samsung is idle capacity; the risk for Apple is not enough processors for iPhones/iPads in the second half of 2013.

It’s not just capacity: Apple may no longer be able to squeeze the best deals out of Samsung because it assumably no longer prepays billions to secure long-term output.

Similarly, Samsung has reduced NAND capacity and refuses to sell to Apple at below market rates, which is forcing a rebound in NAND prices greater than in records we have going back to 2006. Samsung has no intention to increase capacity until prices and returns reach an acceptable level.

There’s a way out of this mess, he suggests:

If Apple gives a solid commitment for processors beyond 2013 or if NAND rebounds faster than current projections we may see upside to these numbers (particularly logic for Apple).

Samsung already was thought to have raised Apple chip prices by an astounding 20 percent, but an unnamed executive has denied the claim the following day, allegedly educating the public “that prices are set at the beginning of the year and aren’t changed easily”.

As you know, Samsung’s manufacturing facility in Austin, Texas – pictured above and below – almost exclusively makes Apple-designed processors for iPhones, iPads and iPods. It was reported in August that Samsung was looking to invest as much as four billion dollars toward boosting Texas output. 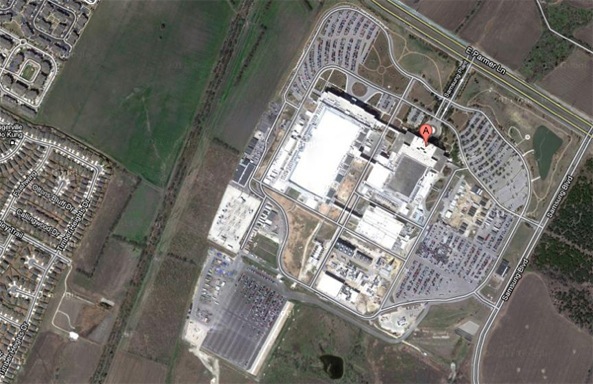 I doubt such an arrangement is now possible in light of the $1.05 billion loss in the high-profile Apple v. Samsung lawsuit and given talk that Samsung is about to lose the Apple account to rival Taiwan Semiconductor Manufacturing Company come 2014.

What’s your assessment of the situation?