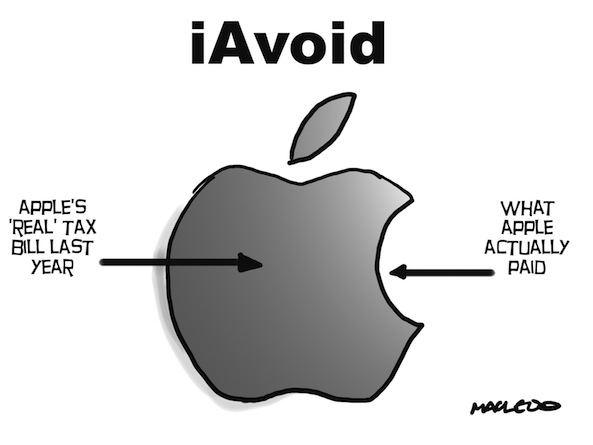 The subject of large companies paying their taxes is something of a hot button topic in the UK right now, which is why the likes of Starbucks have already found themselves thrown to the wolves over their accounting practices. Today, the latest multinational firm to be on the rack is Apple, with the news that it paid just 2% tax on its profits outside the US last year, leaving international taxmen considerably out of pocket.

Paperwork filed in the United States shows that Apple paid around 2% tax on its pre-tax earnings of $36.8B outside the US. That’s down on the 2.5% paid the year before.

Oddly though, it’s all perfectly legal…

As with any company trading internationally, Apple has to pay taxes in the countries in which it trades based on its income. Companies, including Apple, have discovered that they can actually reduce the amount of tax they pay by basing their registered offices in countries which have more favorable tax rates, however.

According to a Sunday Times investigation, Apple, Starbucks and other huge companies are able to skirt around international tax laws by moving their money around their offshore subsidiaries, with Apple’s UK business actually handled by the firm’s offices in Ireland – just outside the UK’s tax reach.

With Apple’s sales continuing to go through the roof around the globe, any way of saving on tax payments will undoubtedly help the company’s bottom line, whether the buying public sees it as right or not. It’s important to remember that Apple is far from the only company doing such things, with Starbucks and Amazon just two that spring to mind. Starbucks, for example, has not paid any corporation tax in the UK at all for the last three years.

Apple sold 125 million iPhones and 58 million iPads last year, with sales showing no sign of slowing down any time soon.