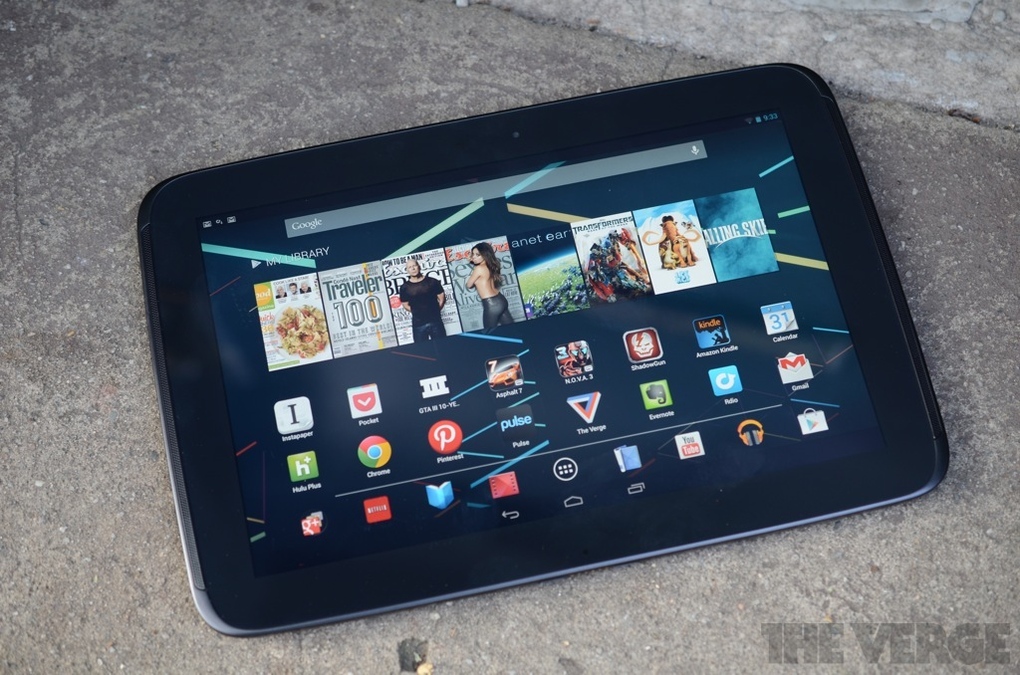 Google announced the 10-inch slate on Monday, and with its 2,560×1,600 display, 1.7GHz dual-core processor and 2GB of RAM, it’s said to be a serious iPad contender. But what did reviewers think?

For a little background, the device is manufactured by Samsung, and is the first full-sized tablet to bear Google’s flagship Nexus brand. It’s $399 for the 16GB Wi-Fi only model, and $100 more for 32GB.

Engadget seems to be really impressed with the display:

“We’ll type it again just because it’s kind of neat: 2,560 x 1,600. That’s an awful, awful lot of pixels in just a 10.1-inch PLS LCD panel — way more than a 1080p HDTV contains. That it’s in something that comfortably can be carried around, and that can be acquired for under $400, is quite a marvelous feat. It’s good to live in the future.

And, indeed, things look fantastically sharp here. Text is rendered incredibly crisply and the UI looks better than ever. The first-party icons are all crisp and clean, though many third-party app icons do look like they could use a new, higher-resolution rendering. Thankfully, the apps themselves overwhelmingly look fine.

CNET calls it Android’s most promising tablet, but says it’s still no iPad-killer:

“The Nexus isn’t an iPad-killer. At least not in its current state. There are still a few performance issues that Google needs to iron out, and until we get more information on the pogo charger’s pricing and availability, the slow charging issue will remain a particular sticking point. I’m also, eagerly awaiting how the apps situation pans out leading up to release. There are a few apps that look great on the tablet, but I want to see more than a handful.”

“The Nexus 10 feels like Google’s open letter to developers. “Look how great Android tablets can be,” the company seems to be saying, “if only you’d make great apps!” The Nexus 10’s display is every bit the Retina’s equal, the build quality is excellent, and it even has a half-decent set of speakers. Android 4.2 is more stable than ever, and Android does a lot of great things iOS simply doesn’t. But you take it out of the box, say it’s beautiful and fast… then what? Apple’s tablet has 250,000-plus other apps that look and work great on a huge, high-res screen, and Android’s ecosystem is leagues behind. The Nexus 10 is a great way to watch movies, but there’s absolutely no way it’s going to replace your laptop the way the iPad could.”

“There’s no denying that Samsung and Google have put together an impressively specified tablet in the Nexus 10. The incredibly high-resolution display is wrapped up with a very capable processor, and while the Nexus 7 feels like it makes some compromises in order to hit its price point, there’s less of a sense that the 10-inch version was built to a budget.

That, and Jelly Bean 4.2′s software improvements, only serve to highlight the lingering drawback to Android tablets: the shortage of good applications. Android phone users have a significant number of titles to choose from, but too many expect tablet users to make do with magnified versions of the same on their bigger screens. When you’re talking about a panel as pixel-dense as the Nexus 10, that’s a travesty.”

“Apple has an advantage, but Google is right there on the cusp of something amazing. Maybe you don’t agree with my statement that Android has a leg up for the tablet experience, but it’s worth thinking about. Perhaps Mr. Brin can stop playing with glasses for a few months and help design a killer tablet. I’ll buy it, as long as it’s running Jelly Bean 4.2 OS or beyond.

It really is that good, and I’ll probably switch between it and the Nexus 7 when I’m not “wired in.”

The consensus on the Nexus 10 seems to be that the display is gorgeous, though despite the resolution difference, it’s not real discernible from the iPad’s Retina screen. The plastic body is easy to hold and grip. And the processor is fast enough to handle pretty much anything you throw at it.

But the main issue with the tablet, mentioned in every review, is the Android app ecosystem. There’s only a handful of  tablet-specific apps in Google’s Play Store, and even fewer that look good on the Nexus 10’s high resolution display. This is where the whole fragmentation issue comes into play.

The Verge gave the tablet a score of an 8.3, a full point lower than its fourth gen iPad score, for this very reason, saying that “there’s absolutely no way it’s going to replace your laptop the way the iPad could.”

It sounds like if you just have to have an iPad-alternative, this is a decent choice. But overall, in the tablet world, Apple still remains king. The Nexus 10 goes on sale starting November 13.