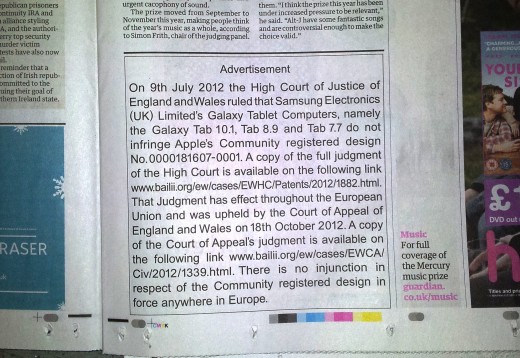 As required by the UK court of appeal, Apple today published a public apology to Samsung in The Guardian newspaper, following the previous U.K. ruling that Samsung tablets did not copy the iPad. Snarky Apple yesterday published a public notice of the ruling on its web site and ran into trouble because it cunningly inserted a paragraph quoting the Judge on how consumers can’t confuse the Galaxy Tab with the iPad because “they’re not as cool”, prompting Judge Robin Jacob to order that the edits be made within 24 hours.

The iPhone maker has pulled the notice upon request by Samsung, which argued that Apple’s version of the notice gave the “impression that the UK court is out of step with other courts”. The company did not update its web site with a revised version of the notice at post time. I take it Apple employees are busy launching the iPad in 34 countries so nobody can update the web site…

Matt Brian of The Next Web posted the above image of Apple’s ad in The Guardian. Notice the absence of the “not as cool” statements in the ad.

It’s funny that Apple asked for 14 days to make changes to the incorrect notice on its web site.

Judge Jacob denied the request, reportedly saying “This is Apple. They cannot put something on their website?”

A paragraph from the original postingon the Apple homepage that the court had a problem with quoted the Judge on how consumers can’t confuse the Galaxy Tab with the iPad because “they’re not as cool”:

The informed user’s overall impression of each of the Samsung Galaxy Tablets is the following. From the front they belong to the family which includes the Apple design; but the Samsung products are very thin, almost insubstantial members of that family with unusual details on the back. They do not have the same understated and extreme simplicity which is possessed by the Apple design. They are not as cool.

At any rate, looks like Apple’s trying to minimize damage by wording the statement ambiguously, but this tactics clearly is not going to fly with the U.K. court.

Matter of fact, this legal outmaneuvering can only backfire and hurt Apple’s reputation.

What do you think of The Guardian ad?