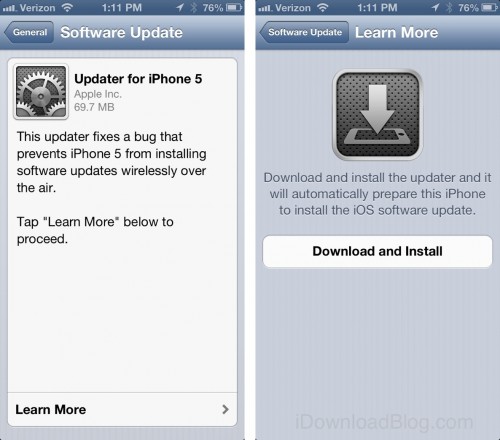 Apple has this morning released an update to its mobile operating system, iOS 6.0.1. The update comes just a day before the official launch of Apple’s new 4th gen iPad and iPad mini.

In iTunes, updating to 6.0.1 is business as usual. But if you have an iPhone 5, you’ll likely see the above screen asking you to install an ‘Updater’ before you receive the actual update. As it states, the Updater fixes a bug that prevents the iPhone 5 from installing updates wirelessly over the air.

This update contains improvements and bug fixes, including:

So this is clearly more of a maintenance release than anything else. And unless you’re really suffering from one of the above problems, we don’t recommend updating if you’re hoping to jailbreak your device. iOS 6 has proven to be at least somewhat jailbreakable, we’re not sure about 6.0.1.

Anyway, if you are looking to update, you can do so by using the over the air installer in Settings > General > Update, iTunes, or you can find the new firmware on our Downloads page.